Media
L.A. Phil’s Gustavo Dudamel: Teaching music took these students ‘from nothing to something’
May 5th, 2017
Tags: education, society 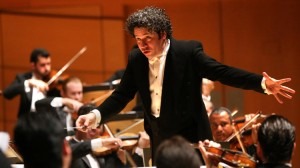 Easter Day 2007, the Los Angeles Philharmonic announced that Gustavo Dudamel would become the music director in 2009. But he didn’t wait long to start Youth Orchestra Los Angeles. By fall 2007, children from South L.A., most Latino or African American, were gathering at Exposition Park to learn instruments and play in a kiddie orchestra dubbed YOLA, inspired by Venezuela’s El Sistema music education program in which Dudamel had grown up.

A few months later, Dudamel came to coach YOLA, and his appearance had all the trappings of a well-publicized feel-good photo op. Civic leaders and the media gathered to watch cute kids get a quick lesson. Full story.