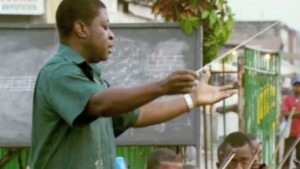 An amazing new documentary film is a must-see not just for music lovers, but for anyone who needs to see the nourishing power of the arts and human connections.

An amazing new documentary film is a must-see not just for music lovers, but for anyone who needs to see the nourishing power of the arts and human connections.

Kinshasa Symphony takes us into the everyday lives of the members of a most unlikely ensemble: the Orchestre Symphonique Kimbanguiste, located in the capital of the Democratic Republic of Congo, a place ravaged by war, endemic poverty and corruption.

The constant hassles and logistical problems these amateur musicians face should give serious pause to those of us leading far more privileged lives in music. They tackle big pieces — like Beethoven’s Ninth Symphony and Orff’s Carmina Burana — out of sheer love, learning their instruments and craft as they go.

Conductor Armand Diangienda founded the orchestra in 1994 after losing his job as an airline pilot. Never conservatory trained, he calls himself “just inquisitive by nature.” He named the ensemble after his grandfather, Simon Kimbangu, a political icon in Congolese history, who also founded a Christian sect that went on to become Africa’s largest independent African church.

When Diangienda first gathered 12 young people who wanted to learn to play the violin, he had only five instruments: “One of them would play for 20 minutes, and then pass the violin on to the next one.” When violin strings broke, they replaced them with brake cables from old bicycles. When they needed a C trumpet, they cut up another instrument. And when they needed a bell for another trumpet, they transformed the wheel rim from an old minibus.

Albert Nlandu Matubanza, the orchestra’s manager, also makes many of the orchestra’s instruments himself. Years ago, there were many more instruments available in Kinshasa, but as Matubanza ruefully notes, a lot of them were stolen. Out of necessity, Matubanza has become a self-taught luthier; he took apart his own bass to figure out how it was made, then started making stringed instruments to equip the orchestra.

The group’s open-air rehearsals are frequently punctuated by the noise and noxious clouds of dust and diesel spewed by cars and trucks passing along Kinshasa’s unpaved streets. Electrical outages are frequent — so much so that the orchestra has a routine to deal with the annoyance. One of the group’s violists, Joseph Masunda Lutete, knows to step in immediately: “When there’s a power cut,” he says, “I just drop my instrument and go start the generator.”

The film’s narrative arc takes us to their performance of Beethoven’s Ninth Symphony in an empty, dirt-filled public square. But what is most revealing, and most gripping, is to see how these musicians deal with the impossible reality of Kinshasa, made possible every day by its hardworking, creative and tenacious people. One of the most wrenching segments follows Nathalie Bahati, a flutist and single mother, as she struggles to find a $40 per month apartment to keep little more than a roof over the head of the young son who accompanies her everywhere, including to her rehearsals.

The joy they take in their music-making is what gets them through. As the orchestra’s concertmaster, Héritier Mayimbi Mbuangi says, “When we’re working on the music, there are no limits. It’s like a staircase: You go up, and up.”