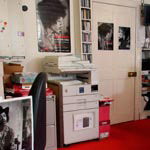 Long before a narrow Georgian home in London became the Handel House Museum, a steady stream of pilgrims came to the building in search of the other giant of music who lived there: Jimi Hendrix.


The curators and administrators of the Handel museum in Mayfair are now preparing to pack up their files, dismantle their desks and open up the rooms where Hendrix lived to visitors to mark the 40th anniversary of his death.

Twin blue plaques on the outside wall pay tribute to the extraordinary flatmates, separated by two centuries, who lived in 23 and 25 Brook Street, once separate buildings but long since interconnected.

George Frideric Handel lived there for almost 40 years, wrote The Messiah there and died in his first-floor bedroom in 1759. Hendrix, regularly voted the greatest rock guitarist, lived there with his English girlfriend, Kathy Etchingham, for two years from 1968, before he died under still debated circumstances in a Notting Hill hotel in 1970, aged 27 – probably by choking in his sleep after an accidental drugs overdose, though some have claimed suicide or even foul play.

Handel paid £60 a year rent for the whole house in the 1700s, Hendrix and his girlfriend £30 a week for their attic flat. Touchingly, Hendrix wrote in 1968: “This is my first real home of my own.”

Many assume that Hendrix knew nothing of the Handel connection: in fact he was charmed when he learned of it, and bought recordings including The Messiah and The Water Music. Some have even claimed to detect Handel riffs in the thunderous guitar chords of later Hendrix recordings.

The building became the Handel House Museum in 2001, with the rooms meticulously restored to their Georgian paint finishes and furnishings. To the disappointment of many, the Hendrix rooms became administration space and have never been on the visitor route. However, many VIPs – including distinguished visiting musicians – have often begged to see them and been taken up the steep stairs to see the rooms (any historic character is buried under decades of office redecoration, except for a few Hendrix posters put up by staff).

The museum has now bowed to pressure and is preparing to mount the exhibition Hendrix in Britain, which will run from August to November, with special events marking the anniversary of his death on 18 September 1970.

Not a plectrum remains from his days in the building, despite the ardent hopes that something might be found in the extensive restoration work before it opened as a museum, so the museum is busy collecting memorabilia, archive photographs and film from rock museums and private collectors.

Sarah Bardwell, the museum director, said: “After moving to Brook Street in 1968, Hendrix learned of the Handel connection with the building and headed to One Stop Records in South Molton Street and HMV in Oxford Street to pick up whichever records of Handel music he could find.

“Clearly, he was intrigued by the connection and we’re pleased to be celebrating his own legacy today. We are delighted to be opening up the flat, which was a true home base to Hendrix during his seemingly endless schedule of touring in the UK and elsewhere.”

Already, the museum has secured a soft broad-brimmed black felt hat instantly recognisable to Hendrix fans, a wildly patterned orange velvet jacket – which was part of the colourful costumes which were as much a part of his stage act as the splintered and scorched guitars – film clips and early recordings and a few lines of lyrics from Third Stone from the Sun scribbled on a tattered sheet of notepaper from the Hyde Park Towers hotel.

London helped make Hendrix’s reputation. He was a rising star when he came in 1966. He became famous for spectacular live performances and was soon attracting crowds to clubs including the Speakeasy, the Bag o’Nails and the Marquee. His first two singles, Hey Joe in December 1966 and Purple Haze in March 1967, and the Jimi Hendrix Experience album Are You Experienced later that year, were big hits, and he was much more famous by the time he returned to the US later that year.

The office staff will be camping out in backrooms and odd corners of the building for the duration. They get their rooms back in December – but even then the exhibition is certain to increase the number of fans knocking at their door and pleading to be allowed a glimpse of a rock music shrine.