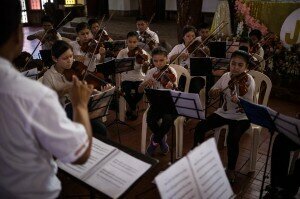 The aging musical score wasn’t easy to read. It was a copy of a copy of a Latin Mass by the 18th-century composer Domenico Zipoli that had crossed the Atlantic and most of South America, only to be stuffed into a box for three centuries in a derelict jungle church where humidity had taken its toll.

And then there were the termites.

The insects had eaten large tracts of the Mass, including the 22nd and 23rd measures.

But while much of the work of Zipoli has vanished in his native Europe, it has managed to survive in eastern Bolivia — along with his vast Baroque musical tradition, which hums through the tropical lowlands. Full story.