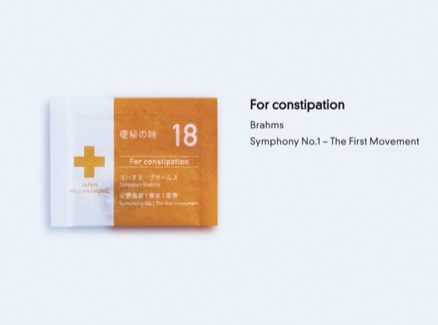 Suffering from a broken heart? Looking to enhance your appetite? Next time, don’t reach for the antibiotics, stop and take the Japanese Pill-Harmonic.

Concerned about the public drifting away from the classical concert halls, the Japan Philharmonic Orchestra has branched into ‘musical pharmaceuticals’, releasing their own line of prescribed overtures and symphonies. By tapping into research claiming classical music works on the brain and tunes up the mind and body, micro SD cards were loaded with approved symphonies and were sent to each patient for consumption on their preferred technology.

Not afraid to think outside the box, the orchestra were unafraid to put their tongues firmly in their cheeks. With cures ranging from Mozart’s Eine Kleine Nachtmusick for prenatal care (aptly labelled as “A small night music” on the packet) to Mahler’s Symphony No 10 for improving sleep, there is a symphony for every symptom. Maybe it’s a Japanese thing but it remains a little unclear why the opening movement of Brahms’s First Symphony is recommended as a cure for constipation!

“For many people, classical music has become something that has nothing to do with them,” say the orchestra. That was the motivation for them “seeking a new idea that will make people understand why classical music should exist.” They chose to focus on the efficacy of classical music, which “works on the human brain and tunes the mind and body system”.

So if you can’t sleep tonight, make sure you have that little bit of Spohr on the bedside table…