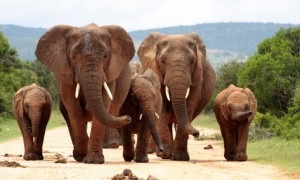 Under new regulations that began to take effect in February, musical instruments that have even the smallest amount of ivory are banned from entering the U.S. unless it can be proved that they were purchased before 1976. That includes any violin bows with a small piece of ivory at the tip, and also some bassoon bells and piano keys.

“In the string world, it’s the hottest story around,” Yung Chin, a bowmaker who lives in New York, tells Naomi Lewin in this podcast. “The suddenness of the ruling that came out on February 25 has really caused a problem.”

The ruling came in response to a dramatic increase in elephant poaching in Africa. Some 30,000 elephants per year, over the last several years, have been slaughtered to supply the global demand for ivory, said Craig Hoover, who heads the U.S. Fish and Wildlife Service’s (USFWS) wildlife trade and conservation branch. He admits that the demand “is not to put small pieces of ivory at the tips of violin bows but for whole tusks and for large carvings and other products.”

But, Hoover added, “We are limited by the laws that Congress gives us. It becomes very difficult to say, ‘We are going to cover this commodity but not this commodity when you’re trying to protect a species.'”

Ivory is used to protect the head of violin bows and support the plug that holds the hair into the stick (right). After an international treaty was enacted in the 1970s, most of the string trade switched from elephant ivory to that made from the tusks of long-extinct mammoths. For musicians who can prove any ivory in their instrument was legally acquired before 1976, it’s possible to obtain a travel permit through the USFWS, Hoover said. That process takes 30 to 45 days and costs $75.

Still, there is concern among musicians who are scheduled to perform abroad, and then re-enter the U.S. Zachary Lewis, the classical music and dance critic of the Cleveland Plain-Dealer, spoke with several members of the Cleveland Orchestra who fear that their instruments will be confiscated when the group travels to Europe in September. “I’ve talked to a couple violinists, a bassoonist, and they’re concerned about it,” he said.

Hoover says that the USFWS is currently gathering feedback from musicians’ trade groups, including the American Federation of Musicians and the League of American Orchestras. Potential amendments to the rules could start to take shape this summer.

Meanwhile, Chin and his fellow bow-makers are developing synthetic tips that can be exchanged for ivory in order to facilitate travel. But the complications may not end there. “This material is an ivory imitation – totally a synthetic,” he said. “But this thing looks very close to ivory. I would be nervous. Hopefully we will work on this so people won’t have the fear and trepidation of traveling around with their materials.”