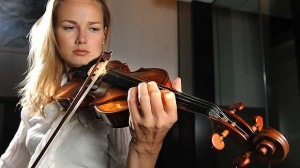 Class of its own ... a Stradivarius
in the hands of Satu Vanska of the
Australian Chamber Orchestra.
Photo: Gary Schafer

FOR almost three centuries their sound has been the pinnacle of classical music. But now violins created by Antonio Stradivari and Giovanni Battista Guadagnini are giving up the ”Cremonese secret” – the mystery of their exquisite sound.

Scientists have used cutting-edge technology to discover that tiny imperfections in the instruments might create their ”perfect” sound.

Stradivari and Guadagnini violins were made in workshops in Cremona, Italy, in the 17th and 18th centuries. These days they are often given to the world’s most gifted musicians to play.

For the first time a Guadagnini violin has been examined using high-energy beams of light from a particle accelerator – a smaller version of the Large Hadron Collider which scientists are using to uncover the secrets of atoms.

This technology allowed Dr Franco Zanini, a physicist and amateur violinist at the Elettra Synchrotron Light Laboratory in Trieste, Italy, to look beneath varnish and paint to the wood beneath.

Dr Zanini compared the Guadagnini, which was made in 1753 and is valued at $1.5 million, with less expensive violins and discovered that a host of tiny imperfections in the Guadagnini helped create its special sound.

”We found that there had been a lot of modifications and restorations made in the past,” he says. ”The f-hole openings had at some point had their shape modified. It could not be seen with a visual inspection as they had been so well covered.

”The top plate had also been restored, with wood and paper patches added.

”They were of extremely high quality and had been made in such a way that even the rings in the wood were perfectly aligned.

”We noticed there were a lot of asymmetries in the instruments.

”In principle they have no reason to be there, but it is possible these imperfections were made to remove the unpleasant harmonics that you get in symmetrical instruments.”

In the Guadagnini violin studied he found two patches on the top plate of the violin, while part of the bass bar had been removed and glued on to another patch.

Two small insect holes were also seen on the top plate, while a crack was visible on the underside.

Dr Zanini believes imbalances in the construction and thickness of the wood helped produce an effect known as harmonic rejection.

This is where harsh, unwanted harmonics that can make a note unpleasant are removed by the wood’s resonance.

”Doing this is beyond a computer,” Dr Zanini says. ”So perhaps they were doing this by chance, or trial and error. But it is not impossible that these imperfections have been made on purpose to remove this imperfect sound.”

Dr Zanini and his team had to construct a special air-conditioned container to ensure the temperature and humidity of the intrument’s atmospheric environment did not change throughout the experiment.

”These violins are very sensitive and their performance can change immediately if their environment changes,” Dr Zanini says.

”It is why violinists are so cautious about taking their instruments on long air journeys.

Dr Zanini is now planning to confirm his theory by using the technique on Cremonese violins by Stradiveri and other master craftsmen such as Guarneri del Gesu.

His research adds to the theories of what might be the Cremonese secret, which include whether unusually prolonged cold weather in Europe in the 17th and 18th centuries led to the trees in the area growing slowly and producing particularly dense timber.

Others have pointed to special recipes for the varnish used on the instruments, while recent research suggests the resonance of the violins might have been caused by a fungal infection of the wood.