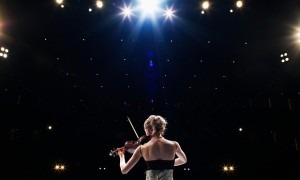 ‘Everyone has their own symptoms … string players talk about their bows shaking.’
Photograph: Thomas Barwick/Getty Images

Soloists at the Proms perform in front of a live audience of 6,000 people, and thousands more on radio, TV and online. How do musicians deal with nerves when playing to large audiences in public?

Jonas Kaufmann was 26 when he forgot how to sing. Kaufmann, who headlines at the Last Night of the Proms on Saturday alongside soprano Danielle de Niese and pianist Benjamin Grosvenor, is today a hugely acclaimed and in-demand tenor, described by the New York Times as one of the most versatile performers of his generation. But 20 years ago, he experienced a bout of stage fright so crippling it almost ended his career. Full story.