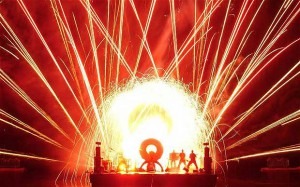 Many professional musicians have been asked to perform unpaid at the London 2012 Olympics. Is this fair? asks Ivan Hewett.

Music is the food of sport, it seems. The organisers of the London 2012 Olympics just can’t get enough of it.

There are five “official songs” for the Games. The opening ceremony will be full of music. And the closing ceremony will, according to the London Organising Committee for the Olympic Games (LOCOG), “celebrate the fact that music has been one of Britain’s strongest cultural exports over the last 50 years” with a “Symphony of British music”. To judge from the flurry of invitations issued to musicians in the past three months, there isn’t going to be a moment’s peace in the Olympic Village. You’d think the athletes might prefer a bit of quiet.

They might get it, as some musicians in the capital are up in arms with LOCOG. The headline acts have no complaints; they can afford to play gratis and have agreed to do so. And the hundreds of amateurs invited to liven up the Olympic Park are happy too. It’s those in the middle who aren’t: the “working stiffs” who make up the bulk of the music profession, some of whom have been asked to play for nothing.

It all started back in April, when the first grumblings emerged on MySpace and Facebook from musicians who had been asked to “volunteer” to play at the Games and told there was an “across-the-board” policy not to pay musicians. The Musicians’ Union (MU) took up their members’ case. LOCOG has insisted with an air of pained innocence that it is stuck with the agreement with the TUC to pay professionals and offer unpaid gigs only to amateurs.

But every week brings more examples of professionals being offered engagements on amateur terms. Steve Haynes, leader of the professional group Barbican Brass, received an invitation that stated “this is an UNPAID event but chance [sic] to showcase the groups [sic] talents to worlds [sic] press. It would be great if you wanted to take part. It’s a chance to be involved in the Olympics.” Another group were told they could not sell their merchandise or CDs on site, no expenses were payable, and that the fee was £50 per act per hour. This is a worse deal than being offered expenses and no fee.

The MU points out that LOCOG would not dream of asking welders or parking attendants or caterers to work for free or for a token fee “because it’s such great exposure”. But LOCOG is not alone in thinking of musicians as different from other professionals. We all do. We all know that musicians love what they do, and if they weren’t paid, they’d go on playing anyway.

Added to which is a lingering prejudice that what musicians do isn’t really work because they so obviously enjoy themselves. A musician acquaintance of mine was once asked about her job at a party. “I play the cello in the City of Birmingham Symphony Orchestra,” she said. “Yes, but what do you do for a living?” came the reply.

It’s bad enough for classical musicians but pop musicians have to face another ignorant prejudice, which is that they earn far too much anyway. The truth is that most musicians, apart from salaried orchestral musicians or choral singers, just about scrape by on freelance gigs. The MU reckons that 70 per cent of its members earn less than £20,000 per year from music. Inevitably many have other jobs on the side, and this further undermines their status as professionals. And it has to be said that some musicians connive at their own exploitation, accepting beggarly fees because it’s better than no fee at all.

Promoters know all this, and drive a hard bargain. This is understandable in a pub or a jazz club, as these venues struggle to survive themselves. But LOCOG is not a struggling pub or jazz club. It’s a well-funded organisation, which (as it keeps reminding us) has a mission to show the best of Britain to the world. Trying to exploit professional musicians with wheedling invitations to “showcase their talents” is no way to do it.