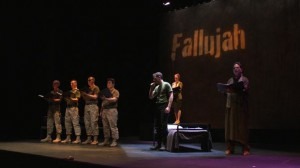 After returning from the battlefields of Iraq, Christian Ellis found the only way to soothe the war wounds in his soul was by losing himself singing opera’s powerful, haunting songs.


Now the 29-year-old former Marine machine gunner— who has attempted suicide four times — is putting his pain on stage in the first opera believed written about the war: Fallujah.

The two-hour performance is an unnerving musical journey into his head.

Fallujah was developed in Vancouver, Canada, by City Opera Vancouver with the help of a playwright, a composer, nine actors and an 11-member orchestra in a kind of performance laboratory. It debuted July 2 on explore.org/fallujah and is being  marketed to opera houses. It is an example of how battlefield trauma after a decade of war is shaping American art as countless veterans, like Ellis, find themselves fighting an even tougher battle at home against horrifying memories, survivor’s guilt, and sorrow.

Art in its various forms is being used as a tool for veterans to come to terms with the bloodshed and adjust to civilian life. Many are telling of their pain in films, books, plays, rap music. Veterans hope by doing so they can foster understanding in a society largely disconnected from the war.

The new chamber opera is a project of Explore.org, a philanthropic media organization that is a division of the Los Angeles-based Annenberg Foundation. Philanthropist Charles Annenberg met Ellis at a retreat for veterans with PTSD. Annenberg was moved by the fact the former Camp Pendleton Marine — who had been trained as a classical singer before joining the military — turned to opera to calm his anxiety.

With opera’s rich history of conveying heartbreak and human suffering, Annenberg thought it the perfect medium because it allows people to feel the fear and turmoil veterans confront daily. He also loved how opera-singing troops break the stereotype of battle-hardened Marines.

Ellis is a living example of war’s human cost. His chest and arms are covered in tattoos of jagged bolts with red spots representing 33 of his comrades who have died either in battle or by suicide.

The opera opens in a veterans’ hospital after the main character tries to kill himself.

The story then transports viewers into the flashbacks that haunt Ellis to this day.

Ellis lost his 20s to the Iraq War. He was among the first Marine units to invade Fallujah in 2004, considered to be the war’s bloodiest period.

He saw close friends blown up. A roadside bomb broke his back before he was sent home.

After leaving the Marine Corps, he has struggled to keep a job or relationship. He was arrested for assault in San Diego and wound up homeless, sleeping on friends’ couches.

He moved to Denver from San Diego to restart his life after he was found unconscious in his San Diego apartment last year by his landlord. He tried to kill himself for the fourth time by overdosing on sleeping pills. He now works as a security guard with other veterans at a Denver bar and sleeps through his days. He said he often feels agitated.

He finds peace in singing while cleaning his apartment, where the walls are decorated with inspirational messages.

"When I sing, it’s like this identity that I’ve been looking for comes out and takes over," he said. "I honestly forget my fears. I forget my guilt, my regrets, the pain, the betrayal, the struggles."

"A lot of times I’ll sing until I can’t sing anymore because I enjoy it so much."

Ellis did not sing in the Vancouver workshops as the opera was crafted but traveled there frequently to ensure the opera gave an accurate portrayal of the combat Marine.

Working on the opera has given Ellis a purpose. He has found a reason to live by telling the world why he wanted to die.

Some Marines from his unit stopped talking to him when he told them an opera company was writing about their time in Fallujah. He said they were afraid of what might be revealed, although Ellis has promised to keep their secrets.

The names of many of the characters in Fallujah draw from Ellis’ fallen comrades, including his best friend whom he tried to save after he was shot in the head by a sniper. That attack plays out in the opera. The main character sings in horror: "His brains are in my mouth."

"People do die in this opera, and they die in very real in-your-face ways," Ellis said. "The purpose of that is for you to come to enjoy a character and instantly have them taken out of your life, just how in reality, literally one day, I would be talking to a buddy and next thing I know he’s shot in the face dead. How do you react to that? How do you move on from that? How do you deal with that?"

Ellis left the workshops at times after hearing the words of deceased friends.

"Being that vulnerable and that raw to the world is a very scary feeling," he said.

One of his most painful memories is that of a teenage boy with a big smile named Wissam who sold bootleg DVDs to the troops. The boy used gestures to communicate and befriended Ellis, writing his name on his hand when the Marine could not pronounce it correctly.

Suddenly Wissam stopped visiting. Ellis learned the boy had been killed by insurgents who accused him of spying for the Americans.

After that, Ellis said he never opened his heart in battle; the enemy was the enemy.

He grew to hate Iraqis and put the boy out of his mind until he wrote his story for New York playwright Heather Raffo.

Sharing his memories on paper helped him unleash his sorrow, and forced him to confront his prejudice against people of Middle Eastern descent, he said.

He was reluctant to work with Raffo, who has family in Iraq, but the two became friends while working together. He said her viewpoint balanced out the libretto. In total there are nine characters — three Iraqis and six Americans.

Composer Tobin Stokes blended traditional Iraqi music into the score as a way to unite the pain both sides endured.

The company tested out Fallujah in May on a select audience that included former Vancouver Mayor Sam Sullivan.

Sullivan said it was the first time he shed a tear over the war.

"It was very moving," he said. "I’m used to seeing operas in other languages with contexts that don’t relate to me personally, but to see an opera about current events — and especially about that horrible experience of Fallujah — portrayed in opera in English, gave me a whole new appreciation of opera itself and the powerful emotions it can bring to a story."

Canadian Army Cpl. Tim Laidler, who runs the Veterans Transition Program at the University of British Columbia, said "it captures the complexity of what it means to be a soldier" including their harsh banter, off-color jokes and the often morally questionable situations they have been forced into by war.

"I felt a lot of emotion, a lot of compassion for the protagonist in it, because I’ve been in those situations myself," he said.

City Opera Vancouver’s Artistic Director Charles Barber said it was crucial the opera not tone down the real-life story, no matter how graphic it may be. In coaching the actors, he told them to match their voices to the horror of the words. In one scene, they bark in disgust, "burnt like charcoal, dragged through the street."

It’s important people do not forget, he said, because though the war is officially over, those who served are dying from suicides while the ongoing unrest continues to take Iraqi lives.

"For all those reasons, this work cannot be a cartoon," he said. "It has to be truthful, eloquent, passionate, and it has to be compassionate. If it is, if we get that right, this new chamber opera, Fallujah, is going to be a stunning experience for anyone who sees it."