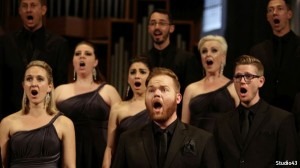 Unlike competitions for soloists, winners do not receive large sums of prize money or recording contracts. That doesn’t seem to put participants off

MDR, A radio station in Thuringia, Saxony and Saxony-Anhalt, recently joined the global celebrations of its son Martin Luther. Even 500 years ago, the rebellious monk was as well-known for his 35 hymns as his “95 Theses”. MDR launched a choir competition for church choirs in the three states, inviting them to audition by submitting a recording of themselves performing Luther’s hymn “A mighty Fortress is our God”. Full story.