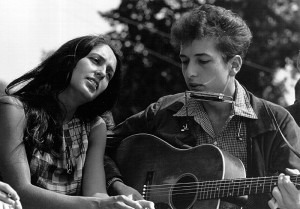 The answer isn’t blowing in the wind. It’s playing on the soundtrack.

It’s easy to feel cynical about pop stars who record songs imploring people to care about others. Sure, such work assuages a bit of the guilt they feel about their lavish lifestyles. But a song doesn’t really change people’s behavior, does it?
Surprise: In some cases, it can. Full story.