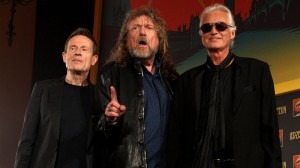 Where do you draw the line between inspiration and appropriation when it comes to musical compositions? That question is at the heart of several high-profile court cases, including the recent “Blurred Lines” trial and a current copyright-infringement lawsuit involving “Stairway to Heaven.” But it isn’t always easy to prove a song is yours – particularly when you’re up against one of the biggest rock and roll bands of all time.

To get an idea of how complicated this can be, here’s one example of how a song can change – even a little bit – from one performer to the next.

Late one night, around 1960, folksinger Anne Bredon (known then as Anne Johannsen) brought her banjo to KPFK in Berkeley, Calif., and performed a song called “Babe, I’m Gonna Leave You” on the station’s open mic show. Full story.