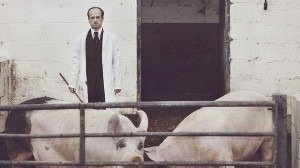 You can’t make a silk purse out of a sow’s ear, but it seems you can make plenty of other things, including music. So says Matthew Herbert, avant-garde sound artist, nay, alchemist, who reckons he is probably the first person to ever make a record out of a pig.

Herbert is in town for the Metropolis New Music Festival, in which he will perform his controversial project, One Pig, a sonic biography that tracks the life of a porker from birth to butcher and beyond, a total of 24 weeks.

It leaves no area of the animal’s doomed life untouched; hypnotic industrial beats are constructed from butchers’ knives, thumping tractor engines, the hum of a fridge and hacksaws; dripping blood is sampled and turned into a driving bass line and the entire soundtrack is punctuated with visceral grunts, squeals, snuffles and oinks; in turn joyous, terrifying and ominous as the creature is transformed from pig to pork.

During the performance, Herbert is joined on stage by a group of musicians and knob twiddlers, eerily clad in white coats, whose job it is to turn the farmyard noises into sophisticated electronica.

In keeping with the pig theme, the percussionist’s drum is made from the animal’s skin and the musical ensemble includes a sty harp – a homemade instrument constructed from a small pig pen. The climax of the night is when a chef appears on stage and cooks pork; the amplified sizzle forms the backdrop for a pulsating dub track while the music throbs in the nostrils.

The aim, Herbert says, is to illustrate the disjuncture between the glamour of today’s gourmet world and the ugly reality of how food is produced.

In his native Britain, Herbert’s homage to the pig has the animal-rights charity PETA steaming – the death of an animal is neither entertainment nor art, it trills – but the composer is unrepentant. ”One of their briefs is to give animals a voice so it is extraordinary that they think I should stop what I’m doing.”

Indeed, he has given up eating anything remotely porcine after making the record. ”I can’t look at a plate of pork without hearing it grunt.”

Herbert was inspired to make One Pig initially to solve his own curiosity about what goes on in the life cycle of an animal summoned into being for the sole purpose of killing it. But there is also a didactic element to his work – he hopes anyone attending will become more thoughtful about what they put in their bodies.

”There is such a shroud of secrecy that goes on in our food chain. I think it’s extraordinary that we are asked to put different foodstuffs in our bodies yet we are not allowed to see the processes behind it. Most of our pork comes from industrial farms but you haven’t got a chance to see how these pigs are raised; you have no rights.”

Herbert couldn’t get access to an industrial farm, so he had to make do with a local one close to his home in Whitstable, in the south of England, which supplies the local restaurants. This at least meant his pig had a better life than most; however, he wasn’t allowed to attend the slaughter. ”The primary motivation of the food industry is profit, so it makes decisions based on this rather than taste or health.

But if you saw the grey slime that makes up most of the cheaper processed meat – the last vestiges of sinew which is scraped off the bones – you would never buy it.”

During his research, Herbert was alarmed to discover that humans come into contact with pork products up to 100 times a day, in various guises, from orange juice to make-up, bullets and wine. He points to the recent food scandal in Britain in which traces of horsemeat were turning up in foodstuffs all over the country. ”It highlights the complexity and unaccountability of supply chains in our food. I think we will look back in 100 years and think it’s extraordinary.”

Herbert, a former pianist and violinist turned DJ and producer who has remixed musicians as diverse as Bjork and Mahler, will also perform two other compositions, one of which, The End of Silence, is based on a short and terrifying gobbet of sound – a bomb exploding in Libya emailed to him by a war photographer.

”Sound has an enormous power to shock and make us think differently about the world and that’s what I want to explore with this,” he says.

The sampling of real-world phenomena imbues the music with a moral dimension, which requires a completely different set of rules; he compares it to the shift in visual art from paintbrushes to photography and video: ”It’s not supposed to evoke emotion in the same way; it’s all about listening to the world differently. For the last 4 million years music has been about something, but now music is that something. It’s a form of documentary now.”