Media
In the forest of instruments, signs of evolution
January 12th, 2011
Tags: instruments 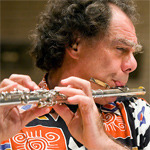 At this summer’s classical music concerts, you could of course find a healthy array of violins, trumpets and cellos. But amid the familiar strings and brass have sprouted some odd instruments and strange adaptations of standard ones.


To create the required resonance for a Boulez sonata, for example, the pianist Marc Ponthus connected two grand pianos with a two-by-four, allowing him to work the sustain pedal of the second from his seat at the first.

At the same Manhattan concert — the opening program of the Mannes College the New School for Music’s new-music festival in June — the flutist and composer Robert Dick played works he wrote for a flute outfitted with what he calls a glissando headjoint, an extension of the mouthpiece that lets him shape his instrument’s lines by sliding from note to note, when that strikes him as desirable.

Besides being outlandish blends of Asian and Western materials and designs, Partch’s instruments use their own tuning systems, with as many as 43 notes (rather than the standard 12) in an octave. At the American Festival of Microtonal Music, held annually in New York, you could do even better: one festival concert in May offered performances on a synthesizer tuned to a 53-note octave.

For lots of musicians, though, synthesizers are so last decade. In their place, laptops — especially MacBooks, with their glowing white Apples — have displaced them as cornucopias of timbre and texture.

The synthesizer’s antique predecessors — the ondes Martenot and the theremin — occasionally turn up too: at one of the Lincoln Center Festival’s “Varèse (R)evolution” concerts in July, the International Contemporary Ensemble used a pair of “cello theremins” in a performance of “Ecuatorial” (1934).

A few days later, at Symphony Space, the M. C. O. Chamber Artists played two works by Scott Munson with a solo line for the musical saw: a low-tech instrument that produces an eerie, quivering sound almost indistinguishable (at least when accompanied by an orchestra) from that of the theremin. In fact, the search for new timbres often bypasses technology entirely. The ensemble So Percussion, at a concert offered as part of the Look & Listen Festival in Chelsea in May, made a lot of music by crinkling paper and plastic wrap.

Earlier in the season the Kronos Quartet turned up at Zankel Hall with a set of Stroh instruments — eccentric-looking late-19th-century hybrids in which a violin, viola or cello’s natural sound is amplified by a brass horn (making it oddly whiny). And a competing new-music string quartet, Ethel, is fitted out like a rock band, with amplified instruments and sound-processing boxes and pedals of all kinds. The essential quartet sound is always there if the members want it — and often, they do — but they can charge into aural worlds that the Juilliard and the Emerson cannot.

But then, the Juilliard and the Emerson quartets probably have little interest in following Ethel into its rocked-out soundscape. It’s not what they do; it’s not the music they play. And, in a way, the lively scene of new and evolving instruments represents part of a larger split in the classical music world between traditionalists and experimenters.

People who worry that classical music is a museum culture normally focus on the repertory, or, more specifically, on the co-dependent relationship between players who want to focus on the mainstream, mostly the 19th-century canon, and listeners who would rather hear that music than anything else. But the same preservationist impulse that keeps the standard repertory in the spotlight controls instrumentation too. For listeners whose greatest passion is the music of the 19th century, the instruments of the standard symphony orchestra are all you need.

And while minor technical improvements may be tolerable here and there, anything that changes the essential nature, sound or look of an instrument will seem to them an assault on tradition.

In a way, it is as if the world of the “modern” orchestra had been drafted into the period-instrument movement. That makes perfect sense. If you believe that the music of Bach and his contemporaries is best heard on the instruments Bach knew — not only the harpsichord and lute instead of the piano and guitar, but also brass instruments without valves, and string, wind and percussion instruments made with 18th-century materials and proportions — then it stands to reason that Brahms and Schoenberg should be played on what we still call “modern” instruments, despite their increasing antiquity.

And because of the power of the core repertory, the orchestra’s makeup is, and will remain, frozen. There is something slightly troubling about that. This kind of arrested development is, for one thing, historically peculiar. After all, most of Western musical history, from medieval times until the mid-19th century, was also a period of virtually nonstop instrument evolution. Instruments were constantly reconfigured, in size, shape, timbre and technique. And composers responded to the latest developments by writing works that took advantage of the new instruments’ abilities.

With the introduction of the fortepiano, for example, Haydn was able to write smooth, singing lines that could have been barely hinted at on the harpsichord. And Beethoven’s late sonatas require a heftier instrument than the kind Haydn first encountered.

Today’s composers have a difficult choice. If they want to be heard by the traditional classical music audience — that is, if they want their works to be regarded as extensions of the historic mainstream — they have to write for the 19th-century instruments that most ensembles play. Some skirt that limitation by writing for expanded percussion sections.

Some composers have rebelled against the tyranny of standard instruments. Partch, for one, began building his own instruments in 1930, and added steadily to his collection through the late 1960s. And though Minimalist and post-Minimalist composers now write plentifully for mainstream orchestra and chamber ensembles, several were outliers at first, starting their own bands with distinctive aural thumbprints.

The heart of Steve Reich’s group was percussion, with voices, strings and other instruments added as required. Philip Glass’s early ensemble was built around winds, voices and keyboards. But Mr. Glass, in those early days, did not want just any keyboards: he was fond of the reedy sound of the Farfisa organ.

These days Mr. Glass’s group plays on pricier, more high-tech instruments that can approximate the Farfisa, along with countless sounds the Farfisa could never produce. If you’re a Glass purist — or a period-instrument fanatic, modern division — the new sound is a compromise. But Mr. Glass has never cared to be a prisoner of historical detail.

Since then, composers have led ensembles of all kinds, and the most common — Missy Mazzoli’s Victoire, or some of the groups led by Du Yun, for example — are classical-rock or classical-jazz hybrids. And some have oddball lead instruments. The composer Ben Neill, for example, plays what he calls the mutantrumpet — a trumpet with three bells (instead of one), six valves (instead of three), a trombone slide and an electronic interface that can turn it into a synthesizer controller.

Are any of these instruments likely to become standard? It hardly matters, really. They are here now, being played by, and composed for, musicians who are fascinated with them, and that is enough. But if I were to hazard a guess which of them might have legs, it would have to be Mr. Dick’s flute with a glissando headjoint. It is, after all, not a complete reworking of the flute — simply an addition that allows Mr. Dick, a virtuoso even on a standard instrument, to create effects otherwise unavailable to him.

Besides, I love the back story. Mr. Dick, though a classical player, is a devoted Jimi Hendrix fan. And having long admired the way Hendrix used the guitar’s whammy bar — a metal lever fastened to the bridge — to bend pitches and control his instrument’s howling feedback, he began thinking about making an equivalent for the flute. Andrés Segovia, the great classical guitarist, used to argue that the electric guitar was a monstrosity. But it inspired one of the great classical and new-music flutists of our time to rethink his instrument.

Now all Mr. Dick has to do is write enough music that demands the headjoint, and that flutists will want to play — and, perhaps more important, persuade lots of his composing colleagues to do the same.