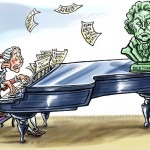 In an interview last April, before his performance of Wagner’s “Lohengrin” at London’s Covent Garden, the noted opera and orchestral conductor Semyon Bychkov stated: “You start trying to be faithful to a composer’s score but great masterpieces give you enormous possibilities for interpretation. You can serve the music without being subservient.” The statement of St. Augustine could apply: “Love God and do what you will.”


Mr. Bychkov was absolutely correct. Unfortunately, he was expressing a minority view. An oft-heard adage has it that the greatest artists are always faithful to and play only what is written in the score. A somewhat similar sentiment is expressed by the brilliant American musician and music historian Gunther Schuller: “A conductor is the faithful guardian of the score—the score is a sacred document.” However, the great Spanish cellist Pablo Casals disagreed: “The art of interpretation is not to play what is written.” Our interpretation of what is written cannot, in fact, be written down.

The score is really a blueprint for our creative talents and, consequently, our interpretive options abound. We interpret not only the music but the verbal directions the composer has given us. No score will tell you how to play allegro (quickly)—there are a lot of different “quicklies” to go around. No score will give you the coordinates for playing rubato (freely), agitato (agitated) orsemplice (simply). Nor will it tell you how to adapt the pedal indications, which applied to 19th-century pianos—a far cry from the very sonorous ones of today.

Composers occasionally specified with metronome markings the exact speed of a tempo they desired. Arturo Toscanini once confided to John Pfeiffer, a recording engineer at RCA Victor, that he preferred a faster tempo in a work of Beethoven than the composer’s metronome markings indicated. But after a long inner struggle, he decided he should stick with the score as written, saying, “I’d rather be wrong with Beethoven.” A passage in a letter written by Brahms could have eased his dilemma. “As far as my experience goes,” Brahms wrote, “every composer who has given metronome marks has sooner or later withdrawn them.”

The great composer Robert Schumann definitely had a malfunctioning metronome judging by some of his tempo markings. At the end of his G-minor Sonata he wrote, “As fast as possible,” and shortly thereafter, “Still faster.” If the “faithful-to-the-score people” ever thought of being unfaithful, that would surely be the time!

Do composers regard their work as sacrosanct as the demands for fidelity to the score would suggest? The answer might surprise you.

In 1960, I opened the cultural exchange between the U.S. and the Soviet Union, and brought Aaron Copland’s Piano Sonata to play. Never having performed it before, I wanted to play it for the composer first. On arriving at his home, I found him tinkering with one of its passages and said, “Mr. Copland, I notice you are playing forte and you have marked it piano in the score.” He turned to me grinning mischievously and said, “Ah, but that was 10 years ago!”

Some 200 years earlier, Chopin would have made a similar remark. Only he would have said, “but that was 10 seconds ago!” Julius Seligmann, president of the Glasgow Society of Musicians, attended a recital where the composer played his new “Mazurka in B flat, Opus 7 no. 1” as an encore. According to Seligmann, it met with such great success that Chopin decided to play it again, this time with such a radically different interpretation—tempos, colors and phrasing had all been changed—that it sounded like an entirely different piece. The audience was amazed when it finally realized he was playing the very same mazurka, and it rewarded him with a prolonged, vociferous ovation. It seems he had facetiously decided to show why he had no need to republish a score—the magic of interpretation would do it for him. He would often say, “I never play the same way twice.”

How thrilled I was in 1967, at the Château de Thoiry in France, when I accidentally discovered previously unknown versions of two Chopin waltzes, written in his own hand and dated 1833. Unbelievably, six years later I again accidentally found unknown versions of the very same two waltzes, this time at Yale University and dated 1832. Besides experiencing the drama of the discovery, I was excited to be privy to Chopin’s interpretive and creative process, ever-changing right up until the moment of publication.

Thinking is creativity’s worst enemy. When I first sight-read a score, everything seems so right, so natural. The notes seem to be playing themselves and the music flows. Why? Because I am not thinking. Inspiration has been my guide—the adventure of a first time. Then comes familiarization, the learning process where, until the piece is well in hand, thinking is allowed. After that, interpretation—choices must be made, but you are finally free to feel and use your creative instincts. And, at last, creation—how do I make the music sound as it did when I didn’t know it? The great poet Yeats spoke of this dilemma so beautifully in his poem “Adam’s Curse”:

Yet if it does not seem a moment’s thought,

Our stitching and unstitching has been naught.

Before the heart can remember, the mind must forget. And, when I least expect to, I will suddenly start playing that piece, again without thinking, as I did in the beginning when I first sight-read it. That is when it happens—I have finally discovered my “moment’s thought.”

Beauty is in the ear of the beholder, as well as the eye. I’m reminded of a story of the pianist Arthur Rubinstein, who after playing a recital in Chicago confided to a friend that he had had an off night. “Well, tomorrow comes the bad news from Miss Cassidy,” he said. Claudia Cassidy, the Chicago Tribune’s music critic, was notorious for her sharp-tongued reviews. The next day he was stunned to read in her column that “Rubinstein never played better.” And with a somewhat bemused smile the pianist quipped, “Who am I to disagree with her?”

And who could disagree with Mozart saying, “Finally it comes down to a matter of taste”?