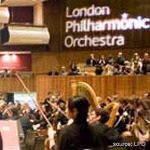 For ten days last month the adventurous, alchemising offshoot of the London Philharmonic Orchestra, the Renga Ensemble, could be found wheeling and lugging their Western instruments through the slums of Mumbai and gardens of Bangalore, past the goaty dogs and sleepy cows, to the schools and concert halls of India’s cities where, the LPO hopes, the musical foundations for a classical revolution might be laid.


It’s a tall order. Despite India’s colonial past, and many attempts to establish classical roots by prominent musical figures from the Parsi community (such as the conductor Zubin Mehta), India has never taken the bait. Its own embarrassment of musical riches probably has something to do with this. Between the deep traditions of Hindustani and Carnatic classical music, Rajasthani folk music and the Bollywood scene, there is more than enough music to keep Indians occupied.

But the LPO is always up for a challenge. They were the first British orchestra to play in post-Stalinist Soviet Union and the first to visit China after the Cultural Revolution in 1973. The Renga Ensemble, an experimental group made up of a revolving cast of LPO members, was set up by the conductor Scott Stroman two decades ago specifically to forge these cross-cultural collaborations. Today it turns its attentions to bridging the folk-classical divide with a free gig with the indie folkists Bellowhead at the South Bank.

Their chummy approach is a key to wooing the Indian market. The LPO are sensitive not to have any whiff of colonialism about the project. “It’s certainly not in any sense imperialist,” Tim Walker, the LPO chief executive officer, insists. “We’re not trying to say our culture is better than theirs. It’s just a matter of saying: ‘This is what we do; if you’re interested, listen or join in’.”

And a merry, collegial spirit dominates the tour. For their three Indian concerts, the ensemble teamed up with the Carnatic jazzers KPC4 for a fusion progamme. For their educational visits to local schools, compositions by A. R. Rahman (who wrote the soundtrack to Slumdog Millionaire) rubbed shoulders with those by Dvorák and Mozart. “In a sense this collaboration comes to its fulfillment with the LPO’s premiere of Ravi Shankar’s symphony in London on July 1,” Walker says.

It’s not just a noble endeavour; it also makes a lot commercial sense. “India has a huge population and therefore potentially a huge audience for us, primarily via recording downloads,” Walker says. “But to support this potential business you have to develop your brand name, and you do that by touring and doing live performances.”

The prospects are promising. Four years ago Khushroo Suntook, the head of India’s only performing arts centre, the NCPA, founded the Symphony Orchestra of India, which is now a sellout attraction in Mumbai. Attached to it is a Suzuki violin school with 300 students. Rhythm House, one of India’s longest- established music retailers, has seen a huge increase in opera DVD sales, which the owner Mehmoud Curmally puts down to “the Bollywoodian appeal of the spectacle and the inane plots”.

In an ancient, oven-hot school hall in the suburbs of Mumbai, the kids looked on silent and agog as the trombonist David Whitehouse slid his way through a performance of the theme tune to the old children’s TV series Jonny Briggs. In the more controlled climes of the British Council theatre in Delhi, reactions were even wilder, young people mobbing the stage for autographs as if the musicians were Bollywood royalty. Sustaining the enthusiasm into adulthood might be harder to achieve.

Sunil Mendes, a teacher at the school and an opinionated amateur violinist (“the children will fall asleep if you don’t play an allegro”), says he was asked to join the Bombay Chamber Orchestra but had to decline because the pay was so small: “It is only a tenth of what a teacher will earn.”

There are also difficulties in trying to tempt Hindus from their own traditions. Most of the classical audience in India is made up of Parsis and Goans such as Mendes. Encouraging Hindus to make the leap is where the Renga Ensemble’s fusion music comes into things.

One of the most intriguing aspects of the trip is the ensemble’s attempt to forge a viable and uncompromised musical hybrid made up of jazz harmonies and structures, classical instruments and Eastern melodies and rhythms. The bouncy, clean themes from the traditional Carnatic singer Ramamani are filled out by the jazz pianist Mike Herting and then coloured in by the other Renga members. The integrity is kept in check by long and slow rehearsals, in which a musical compromise is slowly hammered out. KCP4 coax riffs from their reluctant LPO colleagues, some of whom are visibly terrified (“I can’t, I’ll have nightmares”) and Scott Stroman tries to get his head around Ramamani’s entries during her complicated talas, or rhythmic riffs: “Seventeen beats times by three minus seven?”

“We’re all discovering day by day what works and what doesn’t,” Stroman says. “We come from two cultures with very clear practices. You’re always trying to find out how far you can go— and that’s a lot of the delight in it for us. ”

The very act of going to India and immersed oneself in its chaotic splendour seems to have transformed the Western musicians. “You loosen up. You feel completely differently,” explains the second violinist Fiona Higham, who was at first terrified of improvising in front of her colleagues. “You don’t know what’s going to happen. But there’s such an adrenalin rush from it.”