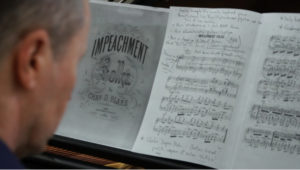 An impeachment means history, and history means attention, and attention means money. Big events sell a lot of papers, as they used to say, though of course, they don’t sell as many newspapers as they used to. Instead, major news events sell just about anything else, from “Impeach 45” buttons on CafePress to impeach-mints on Zazzle. Anytime something that a lot of people care about rises to the country’s attention, someone is there to sell them a related product.

While the availability of universal tools for such entrepreneurship is new, the sentiment isn’t. Consider America’s first impeachment, that of Andrew Johnson. While that 1868 event certainly sold a lot of newspapers, entrepreneurs also found other ways to make money on an event that had captured the nation’s attention.

Including with a polka. Full story.