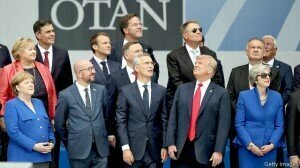 Richard Nixon’s visit to China in 1972 inspired an opera in three acts. The correspondent envisages a sequel

AFTER decades of tense relations with China, Richard Nixon in 1972 undertook a pathbreaking visit to the communist country. So historic was the American president’s trip that John Adams was inspired to write an opera about it. The composer was on to something: summits, with their high stakes and larger-than-life personalities, are natural operatic fodder and despite being a modernist work, “Nixon in China” has established itself in the operatic repertoire. A recent diplomatic trip undertaken by the incumbent American president would, in fact, make for even more compelling musical drama. Prospero has endeavoured to imagine such a work, which might be entitled “Trump in Europe”. Full story.