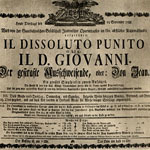 It is 6.30pm on a cloudy Monday evening and the audience is gathering outside the theatre. Although the opening night of this much-heralded new opera has been the talk of the town for weeks, nobody could have anticipated such a chaotic scene. The number of people wanting to get in has overwhelmed the box office, which has just shut down, and those who do have tickets cannot get to their seats in the scrum.


The premiere of Don Giovanni – then entitled Il dissoluto punito, ossia il Don Giovanni (The Rake Punished, or Don Giovanni) – at the National Theatre in Prague on October 29 1787 marked a high point in Mozart’s fortunes. Already a celebrity in the city following the huge success of The Marriage of Figaro the year before, he was greeted with repeated cheers as he came into the pit. The reviews were good and Mozart, in one of his letters, says the opera was “received with the greatest applause”. But what was this historic performance really like and what would we make of it today?

To say that expectations have changed is something of an understatement. When English National Opera’s new production of Don Giovanni opens next month, ticket holders can be fairly sure that the performance will meet certain generally accepted standards. The cast features tried-and-trusted singers who have been thoroughly rehearsed over a period of seven weeks; the orchestra will have had two weeks of rehearsal on its own and seven stage and orchestra rehearsals have been scheduled.

Rufus Norris, the acclaimed West End director, is planning a production that will feel vivid to us today – “contemporary”, he says, “without banging on too hard about it” – and is confident that the singers are “no strangers to bringing characters to life as real people and giving them depth.” The casting has been done with that aim in mind.

In 1787, none of this could be taken for granted. Accounts of the premiere of Don Giovanni are frustratingly few and far between but they afford glimpses of a hair-raisingly different atmosphere – chaotic, spontaneous, noisily convivial, like a cross between a rock gig and a rococo-themed high society soirée.

We know Mozart was dismayed when he arrived in Prague to find the performers far from ready. As was customary at the time, he had left some of the musical numbers – including the overture, several arias and the whole of the second act finale – to be composed after he arrived, probably so that they could be tailored to the performers he had available. Despite the opening night being postponed twice, it seems the overture was only finished the night before the dress rehearsal and the ink was still wet on the parts at the premiere. Mozart was later quoted as saying that the sight-reading of the overture had been an extraordinary feat even if “several notes fell under the desks”.

The orchestra was small, but competent, by the standards of the day. Even so, its members were not full-time and all had other jobs elsewhere. Connoisseurs reckoned that the opera was better played in Prague than later in Vienna, mainly because of the greater expertise of the Bohemian wind players. Wind instruments were difficult to keep in tune at this time. A few years earlier, Charles Burney, the itinerant English musical scholar, had reported that even in the top-rated Mannheim orchestra the wind section “sours and corrupts all harmony”. Mozart may have chosen to write sections of the opera in certain keys specifically because he knew the wind instruments would sound out-of-tune – not a nice prospect for 21st-century ears.

The singers were well known to Mozart, as he had worked with most of them on The Marriage of Figaro. But these were not the experienced singers we would expect to hear in Don Giovanni now: Luigi Bassi, a “fiery Italian” who sang the title role, was 22 years old and Teresa Saporiti, who took on the testing role of Donna Anna, was 24. Student singers at London’s music colleges these days are older.

Even more challenging for today’s purists would be the air of spontaneity that lent an extra spark to the performance. People involved in the Prague performances tell us clearly that there was not enough time to learn such a complex new opera properly. The late conductor Charles Mackerras, who was one of the first to research how Mozart’s music was performed in his lifetime, reckoned the first Don Giovanni would have felt a bit like “a jazz evening”, where improvisation can be an important part of creating new music. He edited versions of Mozart’s operas with the vocal parts ornamented as they might have been on the night and Mozart’s arias half disappear under the extra decorations, like a Christmas tree festooned with baubles.

Nor were the words written in stone. Mozart’s librettist, Lorenzo Da Ponte, joined him in Prague to help with rewrites. When he had to return to Vienna, it seems possible that Casanova, of all people, may have finished off the last-minute verbal nips and tucks. (A draft of the Act Two sextet in his own hand survives among Casanova’s papers in Vienna.) Copies of the libretto were on sale at the box office on the opening night, at Kr40 for one bound in gold paper or Kr20 for an ordinary one.

For the singers, though, the printed text was only the starting point. When Luigi Bassi appeared in a later production of Don Giovanni in Dresden, he said: “[The supper scene] lacked the liveliness, the freedom, that the great Master wanted in this scene. [In Prague] we didn’t sing this scene the same way two evenings running. Without keeping strict time, we cracked jokes, new ones every night, and just kept a careful eye on the orchestra. Everything was virtually spoken, as if we were improvising, in accordance with Mozart’s wishes.” In other words, they made it up as they went along.

Many in the audience would not have noticed anyway. A contemporary report about opera in Prague tells us that only a minority of the 800-strong audience at the National Theatre went to listen to the music. The rest were there simply for social reasons. In most of the boxes, people sat with their backs to the stage and did not pay any attention to the performance, creating “a racket that constantly reigns in the theatre”. In the stalls, people came and went noisily, and “gentlemen seeking conquests” spent the evening eyeing up the female singers with a view to picking up their favourite from the stage door afterwards. It was not unknown for a determined admirer to cart off a desired singer at the interval, leaving the rest of the performance to carry on without her.

So there we have it. The premiere of one of the greatest operas of all time was given by a part-time orchestra, which had barely had time to learn the music, and a cast of singers barely out of their teens who decorated their arias and improvised at will, while the majority of the audience happily ignored the entire event. A truly authentic production would certainly be an eye-opener today.

Intriguingly, there is one final question that still remains to be answered. The premiere of Don Giovanni was timed to begin at 7pm and be over by 9.30pm. These days, the running time is between three and four hours. How on earth did they get through it all so quickly?