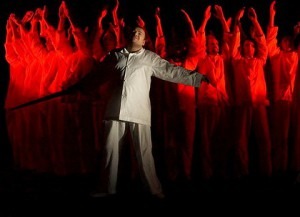 Wagner’s epic Der Ring des Nibelungen is a test for those living in the era of the 10-second attention span.
Photo: Supplied

STAGING Richard Wagner’s four-opera Ring Cycle in the era of the 10-second attention span seems a bit like resurrecting the musical Hair in the age of the Brazilian wax.

At a time when tweeting dictates that even our political leaders spout wisdom and policy in less than 140 characters, this titanic of 19th century musical excess, needing an audience that will sit still for a total 16 hours, will be testing Melbourne’s theatrical endurance next year.

Indeed, for the rest of this year and all of next, it will be testing audiences around the globe as admirers of this curmudgeonly German composer celebrate the bicentenary of his birth.

In normal times, well-heeled and fanatical Wagnerphiles travel the world searching out new productions of an opera that is basically about the world’s end.
Advertisement

In November and December next year, Opera Australia will be doing it here in Melbourne, only the second time the entire thing has been performed in this country. The good folk at OA hope to lure the Wagner jet set with our antipodean version. They have already lured my wife Jill, and I have been swept up in her slipstream.

The tickets are pricey – $1600 for each of us for decent seats at four performances – so we are taking this seriously and have gone into Wagner training.

My routine is pretty gentle, listening to a condensed version of the top numbers on the MP3 player of my phone.

More diligent Jill has a two-CD set explaining all the opera’s musical themes, which Wagner called leitmotifs. These refer to characters or moods that pop up during the 16 operatic hours. She plays it on long car trips – guaranteed to make a three-hour trip feel like four.

Even more serious will be the four weekends away we plan with Wagner-loving friends, each devoted to one opera of the cycle.

If you don’t know, the story is a sprawling tale of guys, gals, gods and demigods, good, bad and flawed, with a predisposition to interbreeding, fighting and seeking control of the world. They face off an assortment of megalomaniac giants, dragons and midgets, plus the gentle Rhinemaidens who appear at the beginning and end. Several recent productions, including at London’s Royal Opera House, have used these to attract attention, by having them warble away nude. Opera Australia is not revealing its Rhinemaidens’ attire or lack thereof.

By the time it is staged, the Australian production will already have faced stiff competition, and I wonder if all the choice might not by then leave the Ring cognoscenti totally wrung out. From Milan to New York’s Met, opera companies will be offering it, as of course will the opera house Wagner had specially built for it in Bayreuth, southern Germany.

London-based cultural tour organiser Martin Randall Travel is offering Ring destination packages. About $7700 buys a 10-day trip to a Seattle performance. For a bit less one can go to Berlin or Budapest.

Opera Australia refuses to say how much its production will cost to stage; $20 million has been mentioned. To get an early cash flow it has set up an enthusiasts’ club called Ring Leaders, offering first chance at the best seats if patrons pay up in the next few months. Patrons are promised better seat priority if they also, as Jill has done, sign up for this year’s season – and it wouldn’t hurt to make a donation either.

Jill went to one of the Ring Leaders sessions and was treated to a pitch by Maureen Wheeler, founder of Lonely Planet travel books, about how she went from ignoramus to Wagner evangelist in the time it took to fly from Melbourne to London.

Wheeler said she knew nothing about the Ring Cycle until a friend revealed that she played what she called ”Hagan’s riff” from the opera to rouse her teenage kids in the morning. The friend lent her the music to play on the flight, prompting Wheeler to fly on to New York to witness a performance there.

Wheeler is the opera’s off-stage goddess, having donated $5 million to help stage the Melbourne production. That’s

Controversial in his own day, Wagner became even more so as Adolf Hitler’s favourite composer. But my concern is how the Cycle‘s ending will be received in this age of sensitivity. The heroine Brunhilde ends it all by riding her horse onto a blazing funeral pyre. Should Opera Australia advise on counselling for depressed demigods? Should it include a disclaimer: no mortal horses were harmed in the staging of this opera?