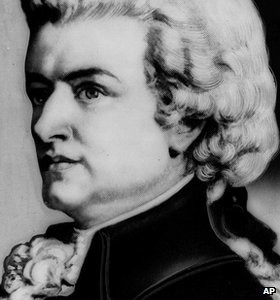 Mozart wrote thousands of pieces
of music, but Iamus is capable
of creating many more

The sound of keyboard music floats over the modern buildings in Malaga’s Technology Park, commonly known as Spain’s Silicon Valley.

But this is not a practice session, even though the musician playing is an international performer.

The pianist is stretching his hand out over the keyboard demonstrating to a software designer that he is working with how many notes one hand can span.

“We have taught a computer to write musical scores,” says Gustavo Diaz-Jerez, software consultant and pianist.

“Now we can produce modern classical music at the touch of a button.”

The team working on the music project, known as Iamus – after the Greek mythological figure who could talk to birds – inputs only basic information.

“We have informed the computer that it is impossible for a pianist to play a 10 note chord with one hand. We only have five fingers on one hand.”

Instructing the computer to write musical scores is a milestone in the linkage between technology and music.

An offshoot of artificial life research, the project uses evolution as its basis, according to Francisco Vico, professor of AI at the university.

“Some people don’t believe it is possible,” he says.

“Each composition has a musical core that becomes ever more complex and evolves automatically.”

The software enables Iamus to write countless scores without needing any human help – that is until the music needs to be performed. It is all down to mapping information.

“It starts with very complex structures inside the computer,” Mr Diaz-Jerez explains.

“It is very different from other computer-generated music. When people hear the phrase they imagine that you can hear the computer playing music.

“Iamus does something different, it projects the complexity we are growing in the computer into musical structures.”

Iamus is fed with specific information setting out, for example, which instruments have to be composed for and the desired duration.

The activity is controlled by an algorithm inspired by biological processes.

Just as human genomes mutated over time to create a multitude of unique people, Iamus alters and rearranges its source material to create complex pieces of music. The only restrictions placed on its output are determined by what can be realistically played by a musician and their instrument.

“It evolves the composition inside the machine,” says Francisco Vico.

“Then a human selects from the set of compositions that Iamus provides.”

Compositions have been recorded by the London Symphony Orchestra. Violinist and director Lennox McKenzie says it was a first for the organisation.

“This piece is not the sort of thing that you listen to and then walk away whistling a tune,” he says of the event.

“It’s really quite large in sound. It reminds me a bit of Varese or Frank Zappa.”

In a test British amateur musicologist Peter Russell also referred to the music as “artistic and delightful” after hearing it before being told of its origin.

Iamus has the potential to compose in genres other than contemporary classical and for instruments to which it has not yet been introduced.

Mr Díaz-Jerez explains that at present it uses what we call the tempered western scale – in which there are twelve notes in an octave.

“But if we instruct the computer to use more notes, like for example in Hindu or Arabic music – they have more notes to the scale – then Iamus will be able to compose pieces that relate to those cultures,” he says

“So it’s just a matter of extending the knowledge of the computer.”

It may strike an eerie note that a computer could become a more prodigious composer than Mozart, Haydn, Brahms and Beethoven combined. For now musicians can still take refuge in the knowledge that it still requires their own personal feelings and talent to interpret the machine’s music and bring it alive.

Meantime the innovation has opened up the door for a new kind of music sales.

The commercial offshoot of Iamus, US-based Melomics Media, is offering the computer-created compositions at a similar rate to what it would cost to download a track from iTunes, Google Play or some other online store.

But the big difference is that not only can purchasers get a copy of Iamus’s creations but also their copyright. And with an limitless number of tracks there’s no risk of running out of material.