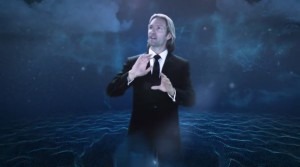 In May 2009, American composer Eric Whitacre conducted a fascinating experiment in social media. Inspired by a fan who sent him a video of her singing his composition Sleep, he invited singers from around the world to record themselves performing the same piece of music. He then took the experiment one step further, inviting singers to take part in a virtual choir.

Each singer recorded their section of Whitacre’s Lux Aurumque in their own home and uploaded it to the choir’s website. The voices were then brought together to create a single piece of music. The result featured 185 singers from 12 countries and was an internet sensation, with more than 3.7 million YouTube hits so far.

Watch the video created for the choir and it’s possible to see each participant in their own space – at their computers with a tiny view of bedrooms, offices and living rooms behind them. As these extraordinary singers give their all, the glimpse of their private worlds is profoundly moving – glorious voices emerging from the everyday.

A process described by Whitacre as ”souls on desert islands sending electronic messages in a bottle to each other”, the concept of the virtual choir has captured the imaginations of music lovers around the world and helped cement Whitacre’s place as a musician and composer of huge talent, enthusiasm and vision. He will be in Australia in April for a series of concerts and choral workshops. A performance of Lux Aurumque, performed by the Choir of Trinity College, will be a highlight of his only Melbourne concert.

While his virtual-choir projects have brought a greater level of recognition, Whitacre’s musical career is full of accomplishments, including composing for the BBC Proms, the London Symphony Orchestra and Chorus as well as a number of international choirs including his own, the Eric Whitacre Singers. He also co-wrote the Mermaids theme from Pirates of the Caribbean: On Stranger Tides and wrote the award-winning musical Paradise Lost: Shadows and Wings. He is now composer-in-residence at Sidney Sussex College, Cambridge University. Not bad for someone who just wanted to be a pop star and only joined a choir so he could meet girls.

Unlike many composers and conductors, who let their work speak for themselves, Whitacre is known as a great communicator with charisma.

”I speak before every piece [I perform],” he says. ”I like to break up some of that stiffness in classical music. I want them to have a unique experience.”

Whitacre’s musical introductions are unlikely to be a dull explanation of the music. An impressive public speaker, his speech about the development of the virtual choir at the 2011 TED (Technology, Entertainment and Design) conference in California led to the first standing ovation of the event. In January 2013, he spoke at the World Economic Forum in Davos, addressing world leaders at a series of sessions about the creative process.

When Whitacre talks, people listen. And often, unexpectedly, find themselves singing, too, even at the closing ceremony at Davos.

”It was amazing; I didn’t even think they would sing,” he says.

”I was thinking are they just going to sit there stoned-faced? But they did. The entire conference actually sang the piece and it was really nice.”

Whitacre says leaders see the arts as an example of how to live well. ”At that level of government, they think that we [in choirs and orchestras] have the whole thing figured out and know how to live together but I try to tell them that it’s not a very accurate representation because in some ways a choir or an orchestra is a fascist state,” he says. ”Somebody is at the front strongly leading everybody – but I think they’re always looking for parallels. How can they bring this back to their own people and use it as a model to include people?”

Despite the endorsement from the world leaders at Davos, Whitacre worries that the arts aren’t rightfully valued. ”It’s an odd thing – these days people who are administrators or politicians grew up with little to no exposure to the arts themselves, so they see very little value in it,” he says.

”You look back, even a couple of hundred years ago, and leaders, good or bad, were immersed in the arts from a very young age and they threw all kind of resources at them – they thought it was an important part of building a society.
”These days there’s this focus on everything but the arts. The irony is that that’s probably … a major solution [to the world’s problems] – bringing people together through our humanity.”

Whitacre can’t be faulted for his part in bringing people together. A fourth iteration of his virtual choir, again featuring singers from around the world, will premiere in July at Buckingham Palace for the Queen’s 60th-anniversary Coronation Festival.