Media
How to be remembered in music (literally)
February 28th, 2014
Tags: society 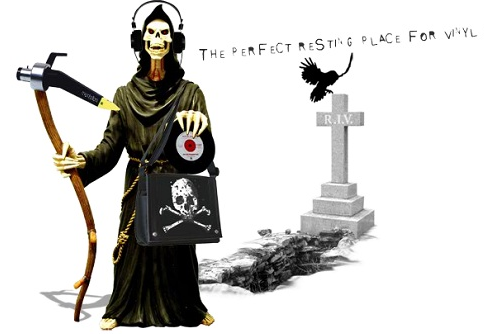 Fancy being pressed into vinyl? What music would you choose…?

British company offers to have your remains pressed into a vinyl LP.

Fancy going out with a bang? The Scarborough-based company And Vinyly (rhymes with finally) offers a uniquely morbid way to be remembered. For the modest fee of $5,000, the company will preserve you for posterity, pressing your ashes into 30 separate 33rpm vinyls.

Operating since 2009, the company was founded by John Leach – a 20-year veteran of the UK music scene as a producer, performer, and co-founder of a string of independent labels – who says that he began it “just for fun”.

The process is not complex. The customer’s cremated ashes are brought to a London pressing plant and scattered into the vinyl. Then the real fun begins. The list of optional extras includes a sleeve portrait by James Hague of the National Portrait Gallery or alternatively by street artist Paul Insect (from either a one hour pre-death sitting or a photo), the creation of a bespoke composition (courtesy of indie-band The House of Fix) or and the option of donating only specific body parts to the vinyl pressing. And if you’re intent on posthumous aural domination, according to their website the company also offers global distribution “at reputable vinyl stores worldwide”.

So far, Leach has only produced four records, including one to celebrate the life of a DJ whose parents wanted their son “to be played at his favourite clubs a few more times”. In the last year, however, it seems that his method is catching on. Since mid-2012 he has been inundated. “I’m sometimes up 24 hours a day just answering calls,” he says.

But the real challenge is deciding how to summarise a life in just 24 minutes. Utter silence is an option, your listeners able to enjoy your own unique crackle and hiss. Or you can follow Leach’s advice and preserve the sound of your own voice. “I’d like nothing more than to listen to my great-great-grandfather say something on a record,” he says. You could preserve your final moments in time with what Leach calls an “aural photograph” with anything from your dog barking to that annoying squeaky door.

So how about taking a spin through the classical death 100. Shock your listeners into life with Beethoven’s death knock (Symphony No 5) then follow it with a short skeletal romp with Saint-Saëns’ Danse Macabre. And why not top it off with Purcell’s When I am Laid, or more appropriately When I am Played…