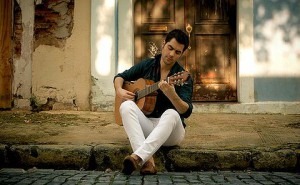 Montenegro’s Milos Karadaglic teaches Adam Sweeting that playing the Spanish instrument the right way and his way are not always the same.

When I mentioned I was trying to teach myself the classical guitar, friends gleefully assured me it was the most difficult possible instrument to master. My amateurish hacking through Neil Young’s back catalogue on my old steel-string acoustic had clearly been no kind of preparation at all, and expert guidance was required.

I went straight to the top. I tracked down Milos Karadaglic, Montenegro’s wizard of the Spanish guitar. ”Absolutely, to play the guitar is really very hard,” confirms Milos, who is in London, putting the finishing touches to his latest album, Latino, before his first tour to Australia.

”Everything you do on it is with your bare flesh and nail. Every movement is milli-milli-millimetres, with both hands. With the violin, of course, it’s about the intonation. But with the guitar, it’s the left and right hands, so it’s very, very complex.”

To help give me a toehold on the learning precipice that loomed, Milos, as he is generally known, agrees to give me a guitar lesson. We meet at the Royal Academy of Music, where he used to practise for 14 hours a day, as his talents were honed under the guidance of Professor Michael Lewin. I haven’t explained the full extent of my musical limitations, but he seems unconcerned. Don’t worry, he says, he is used to teaching classes of young children.

Luckily, he has a soft spot for my chosen piece, Francisco Tarrega’s Lagrima, a popular standard which Milos often plays as an encore.

”Tarrega wrote it when he came to London for the first and last time,” he explains. ”It was raining all the time and he was very depressed and homesick, and he wrote this simple piece, Lagrima, which means teardrop, and every note is like a tear. It’s such a delicate little piece, and there’s so much more to it than what’s on the page.”

On paper it looks straightforward, except maybe for the bit where you have to shift up to the top end of the guitar neck, but learning the notes isn’t the same thing as understanding how to express the piece. I manage to play almost three bars before Milos intervenes.

”No!” he declares. ”If I was a Montenegrin teacher, I would be poking you with a pencil – it’s the communist way. Let’s take it really, really slowly. You’re very impatient, are you hurrying somewhere? And make it very rhythmical. Don’t panic, you’re going to get there.”

I start again, trying to emote tastefully. Milos instantly calls another halt. ”Why are you separating the first two notes?”

Because that’s how you play it on your Mediterraneo CD …

”Well, I always do that and it’s unique to me, but it’s not really right. My teacher tried to stop me doing it, but then he gave up because he felt it was part of how I play. In my opinion, it sings much better that way, but it’s not something I would teach you as my student.”

So the first rule of classical guitar is: the rules that apply to the blundering novice can be ignored by gifted virtuosi. Meanwhile, back at the first two notes of Lagrima, there is no end of things to learn. Milos is getting into his pedagogic stride.

”You have to relax your shoulders – you draw the sound from your whole body, right down to your feet. Can you play me just those first notes? When you hit the note, it’s always very good to just press a little bit harder in the left hand. Yes, that’s very nice. It’s like you’re singing it, that’s the beauty of this piece. It’s really bel canto – deee, daaaah, deee, daaaah.”

Eventually, it is time to slide up the guitar neck to the 12th fret … almost. ”Only play the previous note when in your head you have already moved your left hand to the next chord,” Milos instructs. ”Then you’re that half-step ahead, and you will never make mistakes.”

After fumbling for a bit, I find that his way is, oddly enough, much better. Milos is jubilant.

”Perfect! You can play Lagrima at concert standard if you practise three to four hours a day for three weeks. Then it will be your piece forever, and I suggest you do that. You can come to that piece whenever you feel happy or sad or lonely.”

That may mean practising in the middle of the night, though.

”I love playing late at night,” Milos says. ”But I have this neighbour upstairs going ‘shut up!’, and I’m saying ‘don’t you understand? You’re getting thousands of [dollars] worth of free music!’ But that didn’t make him laugh, so I had to stop.”

My neighbours complain, too, though possibly for different reasons. But at least it’s reassuring to reflect that even some of the greatest musicians have been far from perfect, in a technical sense. Take the legendary Segovia, whose recordings first inspired Milos to play the guitar.

”Segovia had bananas for fingers, it’s really weird when he plays,” he says. ”But you can’t say his technique was bad, because the body does what it needs to do to achieve a musical result. It’s like [opera singer] Maria Callas – the authority and charisma are unbelievable and unrepeatable. Nobody has perfect technique on any instrument, there’s always something that can be improved.”

I’m glad he said that. It will make for a comforting mantra when I’m plucking away into the small hours.