Media
How I fell out of love with opera
August 25th, 2010
Tags: audience, opera 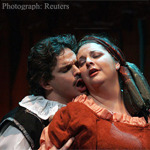 Like anyone involved in the opera world, I’ve done my time trying to explain to bemused friends and strangers what precisely is the point of it all. Ever since I was seduced by it, I’ve been as much of an evangelist as any convert.


I’ve been writing about opera for about a decade now, and over the years, as I’ve watched one companion after another’s eyes glaze over, or close gently, during a show, I have begun to wonder: what if I’m wrong about this? What if it actually is all rubbish, self-indulgent, glittery, adolescent, incontinent, with a vastly inflated view of its own importance? Can opera ever be more than a diversion for people with too much money and too little taste? And was it ever intended to be, anyway?

You hardly need me to tell you that opera is pretty stupid. Ask the audience: plenty of them will tell you the same – if you can get them to wake up. Is there any other form of entertainment so frequented by people who do not like it? This notion – that opera is not actually all that much fun – is hardly new; that’s why it comes all dollied up in red velvet, snobbery, fancy dress and vats of alcohol – sops to the considerable sections of the audience who are there for reasons not associated with aesthetic pleasure: the socially ambitious, the conspicuous spenders, those trying to beguile clients or spouses or potential mistresses.

The opera festival is the ne plus ultra of this: an affair where the supposed main event is actually a sideshow to a rigmarole of Issey Miyake shawls, mud-caked mules, champagne and salmon on the lawn. Opera’s apologists and the publicity departments of state-funded houses will tell you that it isn’t really like that at all, that opera is an art form for the people, that there is no class or age barrier, that indeed the audience are almost entirely first-timers, all under 30, as diverse as the day is long. Five minutes’ research will tell you the facts: 6% of the adult population has been to an operatic event of some sort. As a reward for this, 11% of the arts council’s entire funding is awarded to opera – and more than 90% of that goes to the national companies, who between them put on fewer than half of the opera performances in the country.

Let’s put it another way. The boss of one of the major Parisian opera houses told me the opera houses in Paris cater to the same 50,000 people year in, year out: that’s 2% of the population of inner Paris, and a mere 0.5% of the urban region of Paris. Transfer that to London, factor in the figure of £47m annually handed to its opera houses by the government, and you get a hefty subsidy per operagoer per year.

The point, of course, is that the 0.5% is the right 0.5%. The reason opera gets such a disproportionate wodge of the available money is that the people who go to the opera are precisely the same chaps who are divvying up the money.

You will sometimes hear people say opera was intended as an entertainment for the masses, and it is true that at certain periods in 19th-century Italy it seems to have been immensely popular with all classes (or at least all classes that were worth mentioning, which may not be exactly the same thing). Your Italian bourgeois was presumably no more keen than any other nation’s on hanging out with the unwashed. In any event, opera was about the closest thing the country had then to a mass media, a phenomenon put to good use by Giuseppe Verdi, who used his operas as a means of promoting the cause of Italian unity.

Nonetheless, this was an aberration. Opera was created in the late 16th century as entertainment for the rich, and for most of its history has remained just that. Whenever it has threatened to become too popular, its plutocratic patrons have done everything in their power to stop it: in 1733, the Prince of Wales set up his own company, tellingly named Opera of the Nobility, to rival Handel’s company when that was thought to be getting a bit common; and you don’t have to think nearly that far back to remember outbreaks of horror at Covent Garden over relaxations in codes of dress and deportment, and regular contumely is still thrown at directors who threaten to do anything interesting with their shows, or open them up in any way to people not already profoundly versed in the arcana of opera.

But really, the truth is that they needn’t bother: the barbarians are not at the gate, and nobody is that interested. This was demonstrated a few years ago when Raymond Gubbay gave himself a financial pasting by – for once – misjudging the taste of the public. His Savoy Opera proposition seemed a reasonable one: popular operas in English, six nights a week, in the heart of the West End, at an average ticket price of £35, in a theatre small enough for proper drama to happen; a welcome alternative, you might think, to overpriced, dreary three-hander plays and derivative pap musicals. But the Savoy Opera folded in the face of utter public indifference. There was no audience, and London’s 50,000 aficionados were hardly going to run the risk of mixing with hoi polloi in this new opera for the people.

Operatic beginnings owed everything to ancient Greece and young men prancing about with enormous flapping leather phalluses. These Dionysiac roots soon gave way to something altogether more puritanical, so that by the 19th century, far from being a celebration of the anarchic power of sex, opera was mostly concerned with killing off women in big dresses who transgressed against the terrifically hypocritical, misogynistic mores of the time.

Then, in a curious kind of way, the big dresses became the point of the thing. A few years ago, after Opera Holland Park had staged Fidelio with the prisoners dressed up in a Guantánamo chic of orange jumpsuits, a perturbed bigwig enquired anxiously whether their forthcoming Lucia di Lammermoor would be set in Walter Scott’s 17th-century Scotland. Actually no, he was told, it was going to be the 19th century. “Oh, that’s all right,” says the relieved aesthete, “just so long as it isn’t modern.” Quite right: we don’t want anyone thinking Lucia might have something to do with the way we live now, heaven forfend.

And so developed opera’s latest defence mechanism, a retreat into high camp best summed up by Rufus Wainwright’s recent quasi-opera Prima Donna, a piece that enshrines the extraneous things that have become the point of opera for many of its audience. It took a critical pasting because many of the critics are in the business of convincing themselves that opera is actually something else – a notable forum for discussing issues of great contemporary moment, for example. “Attacking me for using cliche in an opera about opera is absurd,” says Wainwright. “Cliche, camp and sentimentality are cornerstones of the form and we shouldn’t be ashamed of that.”

But you don’t need to see Prima Donna to get operatic camp in full flounce. Last year at Glyndebourne, the conductor dressed in a bunny suit, and heart-shaped confetti rained down on the audience in a performance of Purcell’s Fairy-Queen. The same company’s feted production of Handel’s Giulio Cesare turns it into a four-hour Bollywood song and dance romp; Covent Garden and Grange Park weighed in with travesties of two operas by Francesco Cavalli that strove to be daring with their coy fetish-gear cavortings and arch silliness, which is not to be confused with the honest vulgarity – a carnival spirit where sex makes fools of everyone – that is at the heart of Cavalli (and his masters Aristophanes and Juvenal).

Why does opera think it can get away with these cheap posturings? Of course camp has swamped the culture, from Strictly Come Dancing to Mamma Mia!, but the operatic kind is very particular. This is not a Strictly Come Dancing audience; they are insulated in a happy certitude that laughing at this stuff must mean they are phenomenally sophisticated – for the simple reason that they are at the opera. Because opera has played one very successful trick: appealing to the rich, happening in posh places, receiving all that government money, means quite simply that it must represent the apogee of taste. Being able to sit through hours of it is proof that you’re man enough to take anything culture can throw at you. Handily, it is also proof that you are rich.

Opera composers naturally hoped for more when they were putting all that work in, and there are directors out there who do try hard, bless them, to wring this stuff into some sort of intelligent theatrical life. But forget about them. To join this party, all you have to do is fork out, dress up, drink up, have a snooze, wake up to applaud at any perfect cadence, drift through the rapes, murders and astonishing cruelty of Rigoletto or Trovatore or Tosca, then simper at your friends and sigh: “Wasn’t that lovely …”

In order to survive, opera has to prostitute itself to the rich and to people who don’t like it, to betray its own essence again and again, to the point where it doesn’t even realise it’s doing so. The influential part of its audience wants it dead, repetitive, predictable, pretty, safely insulated in some foreign language. The worst advertisement for opera, the worst publicity for opera, is opera. But, yes, I still go; hoping every time for the return of that simple faith I must once have had, hoping to find again that secret passage to a world of heightened senses unlocked by a magical union of words and music and drama. Sometimes, it’s still there. So if you ask me to, I can still make a case for it – but that would be another story.