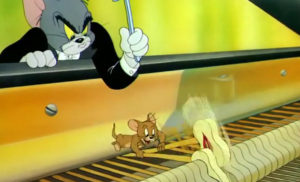 I recently picked up Mark Twain’s A Connecticut Yankee in King Arthur’s Court for the first time. Finding the plot rather amusing, I began relaying it to my father over the weekend. Because he had never read the book, I was rather surprised when he began asking informed questions about the story. In no time at all, he was the one schooling me on plot elements I had not yet reached.

“Wait a minute,” I asked. “Are you sure you’ve never read this book?”

“No, never have,” he replied, “but I saw a cartoon version of the story when I was younger and everything I know comes from that.”

His revelation was intriguing, and to be honest, not the first of its kind. Like many in the Boomer generation, my father grew up watching classic cartoons, numbers of which were produced by the likes of Warner Bros. Full story.