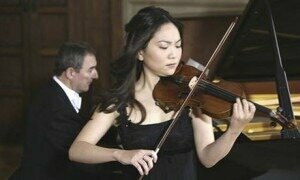 The price of a really good violin such as a Stradivarius can reach millions of pounds. Which is where wealthy benefactors and charitable trusts step in

Three years ago, a Stradivarius on loan to acclaimed violinist Min-Jin Kym was stolen from Pret a Manger at Euston station, London. Kym was devastated to lose the instrument – then valued at £1.2m – a “faithful friend” she had been playing since her teens. Tuesday’s reports that the violin, which was recovered this summer, could fetch £2m at auction in December underline how eye-wateringly expensive violin ownership has become.

“Not many musicians – even very successful ones – could afford to buy a really fine violin,” says Simon Morris at J&A Beare, a specialist dealer whose past clients include Nigel Kennedy and Yehudi Menuhin. That’s where wealthy benefactors step in: “Often, an investor with an interest in the arts will buy an instrument and lend it to them. It’s a very satisfying symbiotic relationship. As well as the financial investment, they benefit from a personal relationship with the player, from the satisfaction of asking them to play private concerts for their friends.” Loans are brokered through philanthropic organisations such as the Chicago-based Stradivari Society, and through introduction forums including Beare’s own International Violin Society. “This is a market driven by need,” continues Morris. “Players will be extremely persuasive in trying to find and convince an investor to fund their instrument.”

While the glamour and financial returns of lending instruments to international soloists appeals to wealthy investors, it’s a different story for most professional musicians, half of whom earn less than £20,000 a year from music, according to the Musicians’ Union. This is a particular issue for string players: unlike pianos, brass and wind instruments, the supply is finite, as the best cellos, violas and violins are hundreds of years old. Prices have been steadily rocketing for decades: far away from Stradivarius and Guarneris, £30,000 is a common starting point for a professional instrument. So musicians scrabble to raise funds through colleges, trusts and charities, who allocate limited grants to young musicians whose careers seem likely to flourish.

The leader of the City of Birmingham Symphony Orchestra, Laurence Jackson, counts himself fortunate. As a student, he borrowed a violin from his college. After he graduated, in 1989, he was able to borrow more than £30,000 from a charitable trust, The Loan Fund for Musical Instruments. He believes that was “one of the biggest loans they had ever given, at the time”, and the interest rate was so low that he was able to pay it back and buy the instrument outright: “I don’t know how young musicians do it today,” he says. “Even if they are loaned an instrument the insurance alone can cost them thousands of pounds a year.” Morris – who has heard of musicians remortgaging their houses to pay for instruments – agrees: “there’s a funding gap. Musicians are terribly underpaid – so underpaid that they have become the sponsors of music in this country.”

As for the few who do own fine instruments, they really are the lucky ones: “They tend to make more money from owning the violin than playing it,” says Morris. “That’s what funds their retirement in the end.”