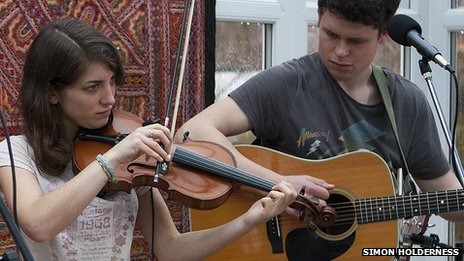 Simon and Snesha Holderness like nothing better of an evening than to settle down at home, put their feet up and listen to some of their favourite music.

In fact, they like it so much that they invite a select group of people to join them in their conservatory for a bite to eat and to share their experience.

Oh, and the performers come too.

The Sussex couple are among a small but growing band of people in the UK who host house concerts – live performances by professional musicians in cosy front rooms, home extensions or out on the patio among the shrubs and flower beds.

Not only are they are an innovative way of treating family and friends to their very own live performance; they are a growing tool in the armoury of professional musicians looking to reach a wider audience – not to mention sell a few extra CDs.

House concerts are becoming an integral feature of many artists’ tours, filling in “dead” dates or just securing a guaranteed pay day without worrying about overheads and venue “cuts” of the takings.

They are, according to Brighton singer-songwriter Emily Baker, one of several ways in which musicians are diversifying to ensure they survive in a fast-changing world.

“In a sense I think the whole thing is part of a wider ecology where hosts, audiences and musicians are all finding and realising there are different ways to listen, perform and experience creative stuff,” she says.

For Simon and Snesha, house concerts are something they stumbled across while watching an American devotee perform in London, but which – much like their loyal followers – they would not now be without.

“To have a lot of these people sat in your living room and they are playing six feet in front of you is incredible,” says Simon, an e-commerce manager, who, with his business analyst wife, stages about six house concerts a year at the couple’s four-bedroom home in Turners Hill, near East Grinstead.

When one of his favourite artists, Richard Shindell, made Turner’s Hill one of his rare UK tour dates, Simon admits he had to pinch himself.

“I thought, is that really him… in my front room?”

The workload involves agreeing dates with artists, notifying everybody on their mailing list, preparing the house – and cooking a wondrous array of dishes for guests and artists alike.

Having a house full of strangers has never proved a problem – particularly as most of those strangers are now friends. Daughter Ayesha may have to give up her bed for the night, but she usually gets a free music lesson in return.

Mailing lists remain under the control of the hosts, but most offer newcomers – often fans of artists who have performed there or friends of those who have attended – the chance to add their names.

Guests pay an agreed donation – often in advance to cover “no shows” – providing the artists with a guaranteed income, often more generous than their share from a larger commercial event.

More than once a performer has remarked of their earnings at Turners Hill: “Smallest audience, biggest pay day.”

The intention is not for hosts to make a profit from the events. Indeed, many subsidise the acts through their hospitality and by making up any shortfall on an agreed figure.

The Holdernesses’ latest house concert is in many ways their biggest to date: the appearance of BBC Radio 2 Folk Awards nominees Katriona Gilmore and Jamie Roberts ensures a full house – and some.

Gilmore and Roberts, with guest Michelle Plum, have brought their own PA system – an unusual feature for Turner’s Hill, where Snesha says their audiences prefer the raw and intimate sound of the artist’s voice and instruments.

It’s another triumph for Turners Hill House Concerts, and one that reflects the phenomenon’s growing popularity in the UK.

If you want more evidence, an online poll to determine which small venue should host one of Surrey singer-songwriter Newton Faulkner’s warm-up shows before he appeared at the O2 chose Tony Fothergill’s well-established House Concerts York – by a mile.

“We probably get 10 or 15 acts a week asking for gigs,” says Tony. “And if we announce a gig to our database we are generally sold out within four hours.

“So we tend to drop it on social media first so that the artist’s own fans get a chance. We don’t want it to be a club.”

To some, that’s exactly what the house-concerts phenomenon appears to be. But as the word on the cul-de-sac grows, so, it seems, will the appetite for this new kind of house music.