Media
History of Muzak: Where Did All The Elevator Music Go?
December 29th, 2017
Tags: presentations 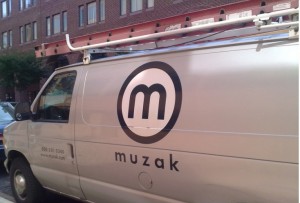 Of Muzak, Professor Gary Gumpert of Queens College, in a 1990 interview for Britain’s Channel 4, said: “[it’s] a kind of amniotic fluid that surrounds us; and it never startles us, it is never too loud, it is never too silent; it’s always there.”

The sounds frequently referred to as elevator music are, at least officially, no more; over five years ago the company folded in a deal with its new owner, Mood Music. Muzak often amounted to the sonic equivalent of a Pan-Am smile, inspiring the listener to a bland, blinkered contentedness. In part, its reputation has obscured much of what made the company viable, and the extent to which its style fed others in its wake. Full story.