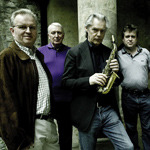 A choral group known for its early-music repertoire and a saxophonist steeped in the art of improvisation may not be the most likely musical partners. But when the Hilliard Ensemble collaborated with Jan Garbarek for the first time in 1993, the result was Officium, a recording of hauntingly beautiful music that sold more than a million copies.


The Hilliard Ensemble and Garbarek have joined forces again for their third album, Officium Novum, which features ancient, modern and sacred music with an emphasis on the musical tradition of Eastern Europe.

How did such an odd musical association begin? Hilliard Ensemble tenor Rogers Covey-Crump says that Manfred Eicher wanted to do something special to celebrate 25 years of his label, ECM Records, so he arranged a meeting in Austria between the artists.

“Within a very short space of time that afternoon in Austria, we were making music, and everybody was amazed,” Covey-Crump says.

John Potter, who served as Hilliard Ensemble’s librarian, had brought a stack of music to the meeting, including Morales’ Parce mihi Domine. The four vocalists began the seven-minute piece as Garbarek stood in front of them.

“I can truthfully say that, after singing for three or four minutes, suddenly we were aware of another sound,” counter-tenor David James says.

“Something was happening,” he adds. “It was more than we normally do — the four of us. The realization was that Jan had picked up his instrument, heard what we were doing and just decided to join in. We continued to the end of the piece sort of … mesmerized, I think is the best way to describe it. And finished. And there was complete silence, and suddenly the few people that were there — Manfred rushed to us with a tear in his eye and said, ‘Guys, we have to record this as soon as possible.’ ”

Garbarek improvises all of his parts with the Hilliard Ensemble. He never looks at the music scores, which is not to say he’s musically illiterate — Garbarek has written pieces for the group.

“[Garbarek] just wants to know the key in which we’re singing — two sharps, two flats, whatever — and that’s all he needs to know,” Covey-Crump says. “Then he just uses his ears. It’s fantastic.”

James says that the artists decide nothing before playing a piece.

“We’ve been performing concerts together for 17 years, and somehow [Garbarek] drives us; he guides us to the apex of the piece, and somehow we sense from him when it’s time to tail off from the piece,” James says. “And somehow it works, and I can’t explain to you how. But he does have this fantastic ability to convey this musical structure of any piece. That’s what I find one of the most exciting things about working with him.”

Four tracks on Officium Novum feature music by Komitas, a priest and composer considered the father of Armenian classical music. The Hilliard Ensemble was invited to record some of Armenia’s traditional church music, the chant which goes back to the fourth or fifth centuries. The members of the choral group became attached to the music and have performed these pieces for the past seven years.

While most of the album has a sacred sound, many of its songs are also challenging. Garbarek and the Hilliard Ensemble have recorded Perotin’s Alleluia, Nativitas before, but this time, they gave a 13th-century piece a jazzy feel. Those looking for more traditional Perotin need not look far: The composer’s music has appeared on many of the Hilliard Ensemble’s recordings.

“Somewhere, maybe up in the heavens, [Perotin] must be smiling, because his royalties must be enormous,” James says, laughing.