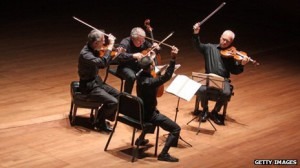 Scientists have come up with a way to reveal the pecking order within a string quartet.

A team from the Royal Academy of Music and the University of Birmingham found that analysing how individual musicians vary their timing to follow the rest of the group can indicate a hierarchy.

They say it shows some quartets have a clear leader to ensure perfect harmony.

However, in other “democratic” quartets the musicians all follow each other, playing an equal role.

Prof Alan Wing, from the University of Birmingham, UK, said of the study, published in the Journal of the Royal Society Interface: “In one quartet, it was as if there was an autocracy. In the other, it was more like a democracy.”

The subtle interactions within a string quartet can bring a performance to life, but the team says it is this interplay that reveals the hidden hierarchy.

To investigate, the researchers asked two well-established groups of chamber musicians to play a composition by Joseph Haydn.

Prof Wing said: “We took them into a recording room and we fitted their instruments up with little microphones under the strings very close to the bridge, which would pick up the sound from each of the players individually.”

The team analysed each musician’s timing as they played, and noted any tiny changes to the tempo.

They then looked at how these variations, which were in the order of one hundredth of a second, affected the rest of the group.

In one of the quartets, they found that three of the musicians were constantly having to speed up or slow down to stay in sync. However, the fourth player did not budge, letting the others adjust to her.

“The first violin was quite clearly providing a leadership,” explained Prof Wing.

However, in the other quartet, all of the members altered their timing equally, suggesting a more democratic arrangement.

Prof Wing said: “There was no distinction between the first violin and the other players – they were all making equal corrections to each other.”

He added that the players were surprised to find that these kinds of hierarchies existed within their quartets. However, the musicians suspected that different pieces of music might alter the organisation within the group.

The scientists now want to find out if audiences notice a difference, and which performances they prefer.

They also want to discover whether similar hierarchies exist within other types of music.

Adrian Bradbury, a co-author from the Royal Academy of Music in London, said: ‘Live interaction between musicians on stage is often the most electrifying element of a performance, but remains one of the least well understood.

“I hope fellow musicians will agree that this method of ‘X-raying’ a performance to expose a group’s hierarchy will prove useful to us and fascinating to our audiences.”