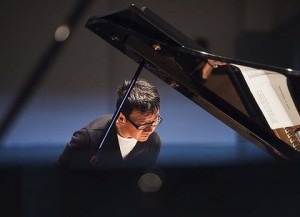 Finding the key to expression...
Melvyn Tan at the piano.
Photo: Eoin Carey

Classical musicians have it easy, don’t they? Sitting around all day, playing the music they love, flying around the world giving concerts to their joyous public and generally having a ball.

Wrong, wrong, wrong. According to Aaron Williamon, professor of performance science at the Royal College of Music in London, if you compare music students and musicians with the rest of the population, they are more physically and mentally stressed, less healthy, more prone to anxiety and more liable to ”self-medicate” (with alcohol, caffeine and even drugs) to deal with all these things.

”Whether that’s a set of characteristics that makes them predisposed to a life in music or whether it’s music that produces these effects, we don’t know yet,” Williamon says.

Musicians are like athletes, in other words, requiring bodies as highly trained as those of Olympians. That’s why Williamon is wiring up the pianist Melvyn Tan at the Cheltenham festival in south-west England on Sunday, measuring his heart rate, breathing, skin temperature and posture, to gauge the strains of a big recital. This is all done with a single device, a strap that goes around Tan’s chest beneath his clothes, so the Pump Room in Cheltenham won’t feel like a science lab. The results will be presented later in the day.

What does Williamon hope to find out? And what might Tan learn from being a concert-pianist guinea pig? ”The question is how students can make the transition to the world stage,” Williamon says. ”We’ve already measured Melvyn playing the same pieces at his studio, a low-stress environment.” The pieces are Bach’s English Suite in A minor and Variations for Judith, a new piece by a handful of composers commissioned by Judith Serota.

”We saw his heart rate accelerating and his breathing slowing down, which is not a predictable response,” Williamon says. Usually, breathing gets faster as the heart rate increases. The result confirms what Tan felt about his playing.
”When I play something fast and difficult, you would think I would be stressed, but it’s the reverse. You’re so concentrated on playing the right notes, you tend not to be nervous. But when you’ve got something slow and emotional, that’s when you feel more stressed. I always thought that instinctively. Now I know it for sure.”

Williamon accepts that every player reacts differently, but there are patterns. ”If you find somebody’s physical response is a problem, you can work on getting them more physically fit; whereas if it’s a psychological problem, you can give them cognitive therapies. But just because your heart rate goes high, that might not be a negative thing. It’s just about how you deal with excitement.”

There are plenty of examples of great performers who could not cope with the rigours of performance. Vladimir Horowitz used to get so anxious he sometimes had to be pushed on stage; Benjamin Britten’s nerves often made him physically sick before a concert; and Yehudi Menuhin suffered from anxiety towards the end of his career. Twenty years ago, a study undertaken at London’s Wigmore Hall suggested that beta blockers, which many musicians take, might help with nerves but can lead to less expressive performances.

Williamon has observed a very tense young cellist whose heart rate was about 170 beats a minute for an entire recital. This is the sort of exertion expected from someone running a middle-distance race – but sustained for an hour. ”He could get uptight very easily,” Williamon says, ”and it showed in the data.”

Musicians may be pushing their bodies and brains to extremes, but few take enough care of them.

Tan started taking regular exercise to ensure he was fit enough for his job decades ago, but few students at the Royal College sign up for the free exercise sessions Williamon offers. It’s the same in the profession at large: no musician wants to admit to weaknesses in their hearing or their mental or physical health. Williamon hopes to use his findings to persuade more musicians to shape up. ”Denial is a very useful strategy,” he says. ”But it’s a very sinister one, too.”