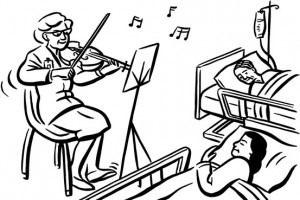 Can music heal? There’s been a great deal of study by neuroscientists on the different ways music acts upon the brain, affecting our behavior, memory and the like. But there is also growing scientific evidence attesting to its curative powers.


Many ancient cultures used sound and music for healing. Pythagoras called it "music medicine." In the Middle Ages, the study of music became a mandatory part of a physician’s education.

In this country, music therapy began to develop as a profession during World War I, and in World War II music was incorporated into the Army’s Reconditioning Program under direct supervision of medical personnel, the first official recognition of music as a therapeutic aid by the military. And in the 1930s researchers discovered that sounds made by the ancients’ drums, rattles and didgeridoos—so-called ultrasound—had huge diagnostic and healing properties. Today there are more than 5,000 certified music therapists in the U.S., and more than 70 colleges and universities offer music-therapy programs treating everything from posttraumatic stress disorder to Parkinson’s disease, Alzheimer’s and pain.

In his book "Awakenings," the British-American neurologist Oliver Sacks writes of patients who went from being catatonic to fully functional when music was added to their environment.

In our own time there have been many stories about the healing power of music. One of the most famous is William Styron’s. He writes of the moment music saved him from suicide in "Darkness Visible: A Memoir of Madness." While watching "The Bostonians" on television in the 1980s, he heard Brahms’s Alto Rhapsody on the soundtrack. The music brought back "all the joys the house had known. … All this I realized was more than I could ever abandon. … And just as powerfully I realized I could not commit this desecration on myself."

After Gabrielle Giffords was shot in 2011, intensive singing therapy slowly brought back her ability to speak.

I recently witnessed the healing effects of music first hand. As part of their "National Initiative for Arts and Health in the Military," I was invited by Americans for the Arts to visit the Walter Reed National Military Medical Center and participate in "Stages of Healing." This program, created by Dr. Micah Sickel, helps patients learn how to play a musical instrument and facilitates live performances whose aim, according to the hospital, is to "enhance the healing process … enrich the lives of patients, visitors and staff" and help relieve the stress often associated with a hospital setting.

I knew what I wanted to play for them—two Chopin waltzes and "A Hero’s Passing By" (which I had written for a TV documentary on my wife’s father, Gary Cooper, but performed here as a dedication to all the world’s heroes). I then played two songs from a musical I had written about the Hunchback of Notre Dame. One was a love song and the other is titled "Like Any Man," which I felt very much suited the occasion. The Hunchback sings that although he is so disabled, he is just like any man.

The piano was placed in the middle of a beautiful, large, circular, blue, star-ringed carpet in a spacious open area. Furniture was arranged on one side so people could sit on couches and chairs quite close to the piano. On the other side, folding chairs were set up for an audience who, given their medical schedules, family visits, etc., were able to come go as needed. It felt like there was very intense listening going on and, for me, very emotional playing. There was a sense of activity everywhere—patients, staff, visitors, all getting on with their lives.

After my performance, my wife and I talked with some of our brave young veterans suffering from a range of physical and psychological conditions. Many told me how much music had helped their recovery.

Barry Bittman is a renowned neurologist and top researcher in the studies of sound, music and the brain. He is the president of the Yamaha Music and Wellness Institute, with which I am affiliated. I once asked him whether there was a difference in the effects of listening to versus playing music. "Statistically significant benefits," he said, "extended exclusively to the group creating music," which requires "a high level of engagement on many levels." Dr. Bittman’s research on creative musical expression, even for people convinced that they were not musical, also recently proved that playing any kind of instrument—no matter how well or badly—enhances the brain’s ability to facilitate healing.

This is confirmed in another program at Walter Reed called Musicorps, where, working with professional musicians, computer-based music workstations and actual instruments, patients learn, play, compose and record music. It is designed to help patients suffering from PTSD and traumatic brain injury. "Learning, creating, and performing music involves so many aspects of brain function that it is believed to recruit uninjured parts of the brain to compensate for parts that have been injured, and help those parts that are injured recover," notes the hospital in its literature on the program.

The memory of our visit to Walter Reed stayed with us long after we’d returned home, and I wanted to be more involved. Then I learned about Music for All Seasons, which hosts performances at venues in New York, New Jersey, Pennsylvania, Connecticut and California. Founded by husband and wife Brian Dallow and Rena Fruchter out of the belief that live music has "a therapeutic, educational and healing influence on all who listen and participate," it is now in its 22nd season. Their newest initiative, Voices of Valor, brings groups of six to 10 veterans together with two musician facilitators to write their lyrics to a group song, set it to music and record it in a professional studio. The CD is then presented to the veterans’ friends and family.

I visited a transitional housing facility in Glen Gardner, N.J., called Veteran’s Haven North, where men who had served in various wars were in the middle of an eight-week program. I asked to hear their stories and they asked me if I would share mine. (Though they were not the result of combat, I have had serious injuries to my hands and disabilities to overcome in the course of my 75-year career as a concert pianist.) As we shared our experiences and feelings, I played the same music as I had at Walter Reed.

They then sang me a powerful song they were working on. Here are some of the lyrics:

On the outside I’m fine

On the inside are scars

We’re fighting for a freedom

But the freedom’s not ours

Just because I’m not on the battlefield

Doesn’t mean I’m not at war

May not be who I used to be

But I’m so much more

Several weeks later I was elated to learn that one of the men was so inspired that he planned to take a course in music at Rutgers University. I only wished they knew how much they inspired me.

Mr. Janis is a world-renowned concert pianist particularly known for his interpretations of Chopin, and the author of "Chopin and Beyond: My Extraordinary Life in Music and the Paranormal," an autobiography.