Media
HD broadcasts, once the future of opera, are now seen by some as its demise
January 4th, 2017
Tags: opera 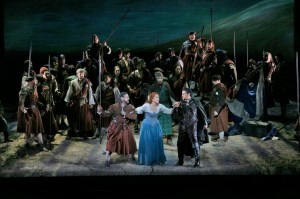 The Metropolitan Opera, the largest opera company in the United States, is struggling. Its ticket sales are way down — to 66 percent of capacity last season. Its general director, Peter Gelb, has had trouble with everything from labor negotiations to artistic vision. And its music director post, long filled only nominally by the once-glorious James Levine, is going to remain empty until 2020, when newly crowned successor Yannick Nezet-Seguin takes over.

But there’s one new initiative that the Met and Gelb appear to have gotten right: live HD broadcasts of performances to movie theaters. In 2006, when opera moved into the multiplex for the first time, it seemed like a daring risk. Today, the broadcasts are shown in more than 2,000 movie theaters around the world, to about 2.7 million people — bringing in about $18 million a season — and will reach the 100-performance mark with “Tristan and Isolde,” which will open the Met’s 2016-2017 season in September. Full story.