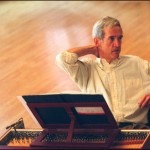 “My students are people who want to work for Goldman Sachs,” says Professor Kelly. “They begin by saying, ‘I can’t do any of this.” They don’t know anything about classical music.”

They learn that the exclusive Bayreuth Wagner festivals was originally supposed to be open to anyone, at minimal prices – and that it was a financial disaster. They They learn about Verdi’s note-by-note coaching of singers, and how boxes at La Scala used to be owned outright by patrons – “kind of like the luxury boxes in baseball stadiums today.”

Kelly has published two books on the subject, most recently “First Nights at the opera.” When colleagues ask why he spends so much time on a music appreciation course, he points out that he’s teaching America’s future elite. “I want to make the world safe for the kind of music that I believe in,” he says.