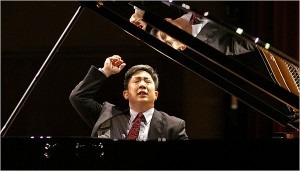 The crowd is taking over. Tasks that have traditionally been performed by highly skilled professionals are increasingly being outsourced to the masses, often with surprising results. And it’s not only production that is being crowd sourced. Judgments about the quality of that production, traditionally determined by experts, are also being turned over to the crowd. Champions of crowd sourcing claim that tapping the talents of the many, even the amateur or untrained many, can often meet or surpass the efforts of the expert few.

But can you crowd source artistry?

Before you say no, consider that using contests to identify budding stars and begin careers is nothing new. Van Cliburn’s astonishing win at the 1958 International Tchaikovsky Competition in Moscow during the height of the cold war shocked the world and propelled him to international stardom. He came home to America a celebrated national hero, greeted with ticker-tape parades. For decades after Mr. Cliburn’s win, conventional wisdom held that to have a career as a soloist, an aspiring musician had to win a big international competition.

The competitions unfortunately proved not to be very adept at choosing great artists. After a while the winners began to sound alike. Eccentricity or quirkiness was rarely rewarded, and competitors playing to win took fewer chances. Today the major international music competitions cast a mere shadow of the influence and prestige they once did. Winning no longer guarantees a career, if it ever did.

If the contests of yesterday were filled with aspiring professionals being judged by experts, a significant new strain of the Big Serious Piano Competition has risen up, and it is a considerably different animal. This is a new age of the amateur, and these amateurs are challenging our notions of quality, established practice and process. The recent Van Cliburn International Piano Competition for Outstanding Amateurs held in Fort Worth provokes questions not only about the kinds of artistry competitions reward but also about changing notions of what defines quality.

Crowd sourcing is being used for more and more things these days, often with some remarkable results. Last year Frito-Lay outsourced the creation and selection of its important Super Bowl television ads to its customers, who in response to its Doritos contest came up with some of the most-watched, most-popular ads of the broadcast. “Britain’s Got Talent” wowed the world when a decidedly unglamorous Susan Boyle got up to sing, stole the hearts of viewers and subsequently sold more copies of her first album than any female debut artist in history. Amateur reviewers on sites like yelp.com and recommendation engines on sites like amazon.com and tripadvisor.com are displacing professionals as the go-to critics (or at least “recommenders”) of choice. Tips from Facebook friends routinely beat the ability of professional critics to drive an audience. And according to Technorati, some 300,000 arts bloggers have taken up the mantle of citizen critics, contributing to a noisy stew of opinion that hasn’t been seen before in the traditional press.

Meanwhile those who underwrite the arts, like the Knight Foundation, are awarding grants for innovation through crowd-sourcing contests like its Arts Challenge. Web sites like kickstarter.com and slicethepie.com let entrepreneurs propose projects and raise money for them by inviting visitors to vote with their wallets. And “American Idol” recently finished a season in which more than 100,000 would-be stars turned up to sing for a chance to hit it big (or at least get their 15 seconds on television).

Speaking of talent surpluses, each year America’s music schools and conservatories turn out more than 14,000 graduates, according to the International Conference of Symphony and Opera Musicians. In a given year there are no more than a couple of hundred openings in the country’s top professional orchestras.

This oversupply has led to a significant improvement in the technical level of playing even in smaller regional orchestras over the last 30 years. Sales of band instruments are at all-time highs, and the ranks of youth symphonies and community orchestras across the country have swollen.

At the recent Cliburn competition, for which I was chairman of the press jury, the level of playing was quite high, far above that of the typical piano student. Could the pianists compete on a professional level? Most of them couldn’t. Did it matter? Not really. The goal for the majority of these competitors was not to make careers; they already have them in other fields. They were more like weekend marathoners, testing their skills and endurance through competing.

Most of the contestants seemed to have had extensive study earlier in life before dropping out to find other careers. They had become doctors, lawyers, designers, teachers, mathematicians, homemakers and software developers. Typically, they had found their way back to their instruments after a break of several years or several decades.

This year 140 pianists applied to compete, and 73 were chosen to play in Fort Worth. They ranged in age from 35 to 79 and came from 28 American states and 10 foreign countries. By the time the field had been narrowed to 25 for the semifinals both the general level of technique and the ambition in the choice of repertory was high.

The level of artistry by comparison was all over the place. The eventual winner, Christopher Shih, a gastroenterologist from Maryland, was the most conventionally professional of the contestants, and he stood out. His performances were effortless, his control consummate. His sense of line through Brahms’s “Handel” Variations, which he played in the finals, showed him to be an intelligent and thoughtful musician.

Clark Griffith, of Fort Worth, took second prize with a program that included his own transcription of the Fugue from Bach’s Sonata No. 3 in C for solo violin (BWV 1005). Third prize went to Barry Coutinho, a family doctor who lives in Pittsburgh.

Dominic Piers Smith of Britain, another of the six finalists, was one of the more eccentric competitors, adopting perverse tempos, setting up internal lines of melody that sometimes appeared to make no sense and generally violating the rules of piano thermodynamics whenever the mood fancied him and playing in a way that no professional would dare.

He dared perhaps because of his day job as a lead designer of race cars for Ferrari. (One of his designs was used for a car that won the Indianapolis 500.) Does it matter what the contestants’ day jobs are? Yes, actually. Listening to Chopin played by a young-looking woman who has 23 grandchildren might change the way you hear and contextualize the music. Would Ms. Boyle have made such a sensation without her back story?

While inexperience was an obstacle for many of the contestants, the playing was often fresh. No matter how well you’ve prepared, unless you’re performing regularly, you don’t really know what’s going to happen onstage. Nerves are a potent drug, so is experience. Knowing what to do when a finger goes momentarily astray or concentration springs a leak divides the pros from the amateurs. But that sense of being on the edge can also be at its best seductive both for performer and listener.

Judges who had participated in the last Cliburn amateur competition five years ago said the level was markedly higher this year. Could that have been the result of what Chris Anderson, curator of the popular TED conferences (originally known as Technology, Entertainment and Design), calls “crowd-accelerated innovation”? Mr. Anderson noted in a talk last year that the ability to see other performers on YouTube and compare yourself had dramatically upped the games of TED conference speakers in subsequent years. On YouTube half the fun of viral videos is checking out the response videos people make, which often try to outdo the original. The original has become merely fodder for better ideas.

This year’s Cliburn competition chose two of its contestants through YouTube submissions and audience vote. All of this year’s performances were live streamed and archived; during the week of competition the Cliburn Web site served 120,000 streams to viewers in 140 countries. An average of 50 people participated in the live text chats that accompanied each streamed performance.

The success of the Cliburn amateur, which began in 1999, has spawned a half-dozen other amateur piano competitions, creating an underground circuit of sorts that some of the more hard-core competitors travel. The winner of this year’s press jury award, Jane Gibson King, had previously won a gold medal in the Seattle International Piano Competition. In the jury room the press critics found themselves debating not just which performance was best but what “best” meant in this context. Were we merely looking for the nearest facsimile of the professional model or was there some special quality of amateurism we could discern? Ms. King demonstrated an expressive warmth of soul and willingness to linger over her music that struck us as special.