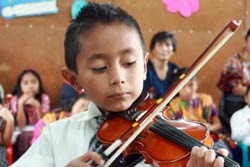 “There he comes, the violinist!” That’s what 5-year-old Abner Xiquín hears when he gets together with his extended family.

Abner, an only child who lives with his mother and grandparents, has been studying music and playing violin since he was 3. He’s part of World Vision’s Artistic Development Centre in Guatemala.

The centre was created in 2004 to promote music education among vulnerable children and teens between the ages of 3 and 25. Currently there are more than 200 children involved in the programme.

The Youth Symphony Orchestra made its debut in 2006 performing Handel’s Messiah.

Abner made his debut at the age of 3. He didn’t yet know how to read and write, but he could play the violin.

“When I see him doing something that I can’t, I feel a great satisfaction,” says Angela Patzan, Abner’s mother.

Ruby Boror, who teaches violin at the centre, says, “The biggest satisfaction is to see them growing, enjoying, and learning to play violin, which is a difficult instrument. But they learn by playing.”

A community plagued by poverty

The centre is located in one of the most violent municipalities of Guatemala, according to the Human Rights Ombudsman Office’s Special Report, San Juan Sacatepéquez 2011.

Children and youth in the area are threatened by gangs, lack of access to education, and teenage pregnancy. More than 54 per cent of the nation’s population lives in poverty and more than 13 per cent lives in extreme poverty .

Most people begin working at age 15, which contributes to the high illiteracy rate in the area.

“Parents provide as much support as they can, but it turns really hard when young people can’t read or write,” says Ruby.

The Artistic Development Centre is changing parents and children’s attitudes regarding the importance of education. Many parents are returning to school.

That’s the case for Abner’s mom, Angela. She now attends junior high school to complete the education she didn’t get when she was younger.

Abner used to spend time playing and watching cartoons before he started attending the centre.

Now he likes to listen to classical music and uses his toys as an audience when he practices.

“Sometimes mothers think that they are too young [for this project] and children could cry. Others think they won’t practice, but Abner practices one hour every day, and he doesn’t think about the time!” says Angela.

She helps Abner with his practice sessions, using games, clapping, jumping, and singing.

“Now, people know our community, our children are growing with values, and they are going to have a better future,” Angela says.