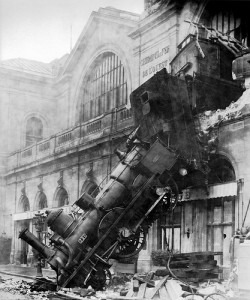 Over ten years ago, an adult student of mine referenced the book Don’t Sweat the Small Stuff–and it’s all small stuff. As a knee-jerk reaction, I responded positively to my student’s comment. It sounded good, so it must be true. After all, she was nearly three times my age. But as I chewed on the thought over days, even years, I never could completely swallow it.

The reason, it seems, is that music doesn’t work that way. You can’t gloss over the details and expect a high level of success. For proof, check out Why an A in Math is Still an F in Music. I have students every week bring in songs that they sincerely want to play. They tell me that they have played it over and over, but can’t seem to get it polished. The problem is that they are unable or unwilling to stop and fix one mistake at a time. Instead, they repeat the whole song over and over, hoping that things will improve.

Successful musicians are the ones who have figured out how to leave no stone unturned. They pay attention to detail, and they don’t multitask. If they can’t play the first measure correctly, they know they have no business practicing the second or third measures.

So, what’s the problem? The rest of life doesn’t work like this. Near perfect margins aren’t necessary in almost any field outside of the arts. Engineers and architects over-build structures with safety in mind. Doctors prescribe wide-spectrum antibiotics without ever having a firm diagnosis, and when the patient recovers, they can only guess whether it was the antibiotics or the patient’s own immune system that aided in recovery.

Not only are these near perfect margins unnecessary in other fields, they are cost-prohibitive. An employee who spends five times longer to complete a task but does so perfectly isn’t the model worker. A mail carrier who delivers to 50 houses correctly every time isn’t keeping up with the carrier who misses a house or two but covers 500 homes in their daily route. People can simply pop those incorrectly addressed letters back into tomorrow’s outgoing mail; no big deal.

But to the perfectionist-I don’t really like this term-there are usually just three options. The first option is to continue to perfectly under-perform and suffer the negative consequences. Second, you can accelerate your efforts, hitting both the quality and volume quotas, but you do so at a great personal cost. You rob yourself of after-work energy and peace-of-mind. Third, you can just quit. And some do. They are called starving artists for a reason.

It’s a lose/lose situation for the mal-employed artist. And sadly, they aren’t handing out those art career vouchers with health benefits and pensions at the job placement office the last time I checked. For this reason, I wrote the four-part series How to Quit the Job You Hate and Do Music Instead.

The really sad thing is that these maladies don’t escape us even when we are relatively successful in the arts. Regardless of who you think of,- an eccentric writer, a famous actor, or Johnny Cash- there’s trouble. The same critical, problem-finding, problem-solving mind that it takes to make good music, paint, or write can be destructive in relationships. While we focus on fixing problems, we too often forget we are working with people. And relationships are not nice, tidy math equations.

Scrutiny must only be applied to ideas or inanimate objects, not people.

Artists aren’t super-heroes. We’re special, but not like Batman. We’re more like Rain Man. We have abilities that are unique and valuable, but we miss the obvious. We’re like the gifts we bear, impractical and essential all at once.

I’ve come to believe that the reason artists fall apart, sometimes extraordinarily, is because we haven’t learned when to fail. Failure is part of daily life, but most don’t end up like Hemingway or Van Gogh. The difference may come down to three P’s: priorities, Pareto’s law, and poise. (Hey, that was alliteration!)

We all fail. Everyday. Right now I’m failing at hiking Hadrian’s Wall. I’ve come up short retiring by age 30. And of course, there’s that leaf pile in my yard that needs to be moved. Whether practical or extremely idealistic, we are always surrounded by more goals and tasks than mere mortals can achieve in a lifetime. A strong sense of priorities is what gives us direction. For the creative type, boundless imagination presents a myriad of desires. Find out what really matters, and stay with it.

I’m sure I have alluded to Pareto’s Principle before. It’s also known as the 80/20 rule; it usually takes 20% of your time to get 80% of a job done and 80% of your time to finish the last 20%. Or another application could be that 80% of a population is lifted by the innovation and creation of 20% of the population, or, depending on your political perspective, 20% on top benefit by the labor of the 80% of workers. The application of this principle goes on and on. When it comes to your craft, you have to go all the way. The rest of the time, getting that last 20% may not make sense.

I played basketball when I was a kid. I wasn’t very good. I think the phrase “couldn’t hit the broad side of a barn” was used at some point. But I had heart. When the coach said to give 100%, I did it. When everyone else was jogging back to the other side of the court, I was sprinting. The problem was that I exhausted all of my energies on the unimportant things. When I had the ball, I was already out of wind, unfocused, and without the ability to do anything other than react. I tried hard, but my lack of poise was my downfall.

These three P’s, -priorities, Pareto’s law, and poise- are different ways of describing what in the world of finance is called strategic default. When the value of an underlying asset becomes significantly less than the cost of the loan, some choose to suffer the pain of defaulting on a loan instead of the pain of overpaying. We must make similarly hard choices. You can’t do everything equally well. You must choose when and how to fail, so that you can succeed at what matters most.

The negative effect of the artist’s critical mindset can reach beyond jobs, life direction, and relationships. Even the artist’s medium, one’s writing, painting, music, etc., can be hampered by the never-ending lens of scrutiny. How many writers finish their book and proceed to edit it for years. They never send it off, because “it’s not ready.” How many musicians put off making a recording, because “they’re not good enough yet?”

There is reason to take pause before publishing an artistic work. You do have to make peace with it. It must seem right. But as some point, you have to simply cut the cord, pull the plug, and let it go.

A calling in the arts is a mixed blessing for sure. Despite receiving encouragement as a young person from musical mentors, there was always a word of warning. “It’s going to be a hard road.” I’ve discovered that the challenges of making money through music is only the half of it. The harder task is getting out of your own way. How have you learned to deal with life as an artist?