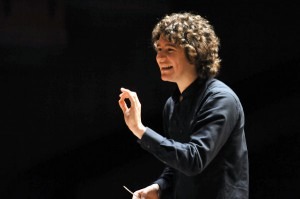 British conductor Robin Ticciati is to be music director of the Glyndebourne Festival, Britain’s annual summer opera event on the Sussex estate of the its late founder, John Christie. Glyndebourne is known as much for its artistic program as for its aristocratic trappings, with patrons attending the opera in formal attire and dining during the interval.

Ticciati, now 28, starts in 2014, the festival’s 80th anniversary, and succeeds Vladimir Jurowski, whose contract ends in 2013. The year 2014 also marks the 10th anniversary of Ticciati’s professional conducting debut, which also took place at Glyndebourne. He subsequently became music director of the touring company, GOT, from 2007-09.

Currently, he is principal conductor of the Scottish Chamber Orchestra and of the Bamberger Symphoniker, and is an active guest conductor, both of orchestras and operas. Upcoming engagements include the Royal Concertgebouw Orchestra, the Los Angeles Philharmonic and the Cleveland and Philadelphia orchestras. This year he’ll also conduct at the Salzburg Festival and make his Met Opera debut, with “Hänsel und Gretel.”

Commented General Director David Pickard, “None of us will forget the excitement when, as a 21-year-old assistant conductor on ‘Die Zauberflöte’ in 2004, Robin Ticciati stood in the pit at Glyndebourne for the first time and conducted the overture. Those who were present at this rehearsal were in no doubt of his exceptional talent.”

Ticciati returned the compliment, emphasizing in particular the extra rehearsal time afforded by the privately funded organization. “The great emphasis on detailed musical preparation is a genuine privilege.”