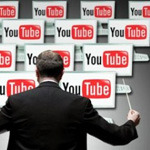 Classical violinist Paolo Calligopoulos says he pulled on the leather jacket, black fedora and sunglasses to perform an electric guitar solo for an online audition just for fun.

But the Brazilian’s video was such a hit with music lovers the 35-year-old this month found himself playing his red electric guitar before a packed audience at Sydney’s Opera House as part of the YouTube Symphony Orchestra.

“I am going to be a rock star,” Calligopoulos said before the Australian performance, only the second formation of the global orchestra for which the selection process is held entirely online.

Advertisement: Story continues below
“I don’t know what to expect,” he said, adding he didn’t even have an amplifier in his apartment in Brazil because it would be too noisy, plugging his guitar into his computer instead.

“If I get a giant amplifier like the one they’ve got me here they are going to throw me out of the building,” he said. “And my wife is going to divorce me as well,” he joked.

As the orchestra — including Su Chan on the Chinese zither, the guzheng, and William Barton on the ceremonial Aboriginal instrument, the didgeridoo, — played, the outside of the Sydney Opera House was covered in colourful projections on its iconic white sails.

Players included professionals such as Calligopolous, who performs with an orchestra in Brazil, as well as amateurs, with the youngest member only 14 years old and the oldest 49.

For Calligopoulos, whose wife played in the first YouTube orchestra, the experience was a chance to break out after years of playing first violin in orchestras in Brazil.

“After 10 or 20 years playing in orchestras, it gets really tired,” he said.

“But with this experience, to go and meet different people from all around… and this exchange of ideas and experiences, it’s just fantastic.

“And here it’s rehearsals, (there’s) no time to prepare and you try to listen. It’s not like the easiest thing to do.”

The opportunity to visit Australia was the icing on the cake, said the musician who learned the piano and classical guitar from the age of 10 but only picked up a violin in his early 20s.

“I don’t think that a Brazilian orchestra would come to Australia and play so this was an opportunity I could not miss. It’s really amazing,” he said.

“(It) feels like this is an opportunity to make your music come alive.”

His only complaint was that the perfectionism of his fellow musicians meant they wanted to practice instead of tour the city.

“Some times I want to go out and get a drink but no, people have to practice. Everybody is so dedicated,” he said.

For Michael Tilson Thomas, the music director of the San Francisco Symphony who conducted the orchestra, the endeavour is a marriage of the old and the new — bringing together new technology and the venerable art form of classical music.

During rehearsals, the conducter slaps his thigh and interrupts players to gesture emphatically, clearly passionate about the music they are producing.

He says the 2011 incarnation is more collaborative and ambitious than the 2009 project in which he was also involved, but also more spontaneous.

He said the orchestra was a means of bringing classical music to new audiences and introducing them to the “great treasure” of the works of composers such as Wolfgang Amadeus Mozart and Felix Mendelssohn which featured on the programme.

Music, he said, was a tradition “which tells us so much about who we were for the last 1,200 years”.

The finale performance can be viewed at https://www.youtube.com/Symphony