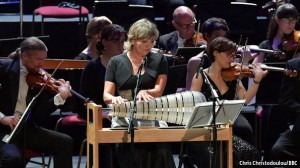 SOLVING a crossword puzzle one day some 30 years ago, a young Austrian violinist couple named Christa and Gerald Schönfeldinger came across a reference to an instrument they had never heard of, consisting of dozens of glass bowls, and referred to as a glass harmonica. They discovered that the instrument, also known as the armonica, had been invented by Benjamin Franklin, one of America’s founding fathers. During his frequent trips to London the renaissance man—Franklin, who helped write the American constitution, was a scientist and inventor as well—had been inspired by Englishmen’s habit of making music by striking their wet fingers around glass rims.

Not only did the Schönfeldingers solve the crossword puzzle: they set about finding the instrument and learning it. In October their Vienna Glass Armonica Duo celebrates its 25th anniversary, and the couple are also celebrating the long-forgotten instrument’s rising prominence. “We’ve really been noticing a growing interest in the glass harmonica for the past couple of years or so,” says Christa Schönfeldinger. “People are looking for an alternative sound in our noisy world.” Full story.