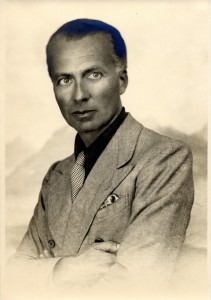 Giacinto Scelsi, Count of Ayala Valva, was born on 8 January 1905 in Pitelli, then a district of Arcola in the province of La Spezia in northern Italy.

But it is Rome to which he remains indissolubly tied. It was there that, already no spring chicken, he asked his driver to take him to the lofts and cellars of Trastevere to attend the concerts of MEV and other drugged-up hippies; it was there that he founded a record label with Alvin Curran and Roberto Laneri, Ananda (it would release only five records, all miniature masterpieces); it was there, in a sumptuous building at 8, Via San Teodoro, that he invited friends, young people and musicians to talk about music, compare notes and listen to everything. Full story.