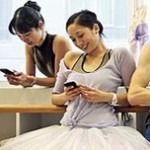 From backstage status updates to an opera libretto, the arts are learning to be creative with social media, writes Elissa Blake.


Sitting in the back row during Bell Shakespeare’s King Lear, 21-year-old Hannah Suarez is softly tapping her iPhone screen. She is a tech-savvy theatre lover logged into Twitter, quietly sharing her thoughts on Shakespeare’s epic tale of power, love and betrayal with her friends and followers, one or two pithy sentences at a time. Every few minutes she taps out a tweet:

‘Goneril, You are not worth the dust which the rude wind blows in your face’ said Albany. Oh snap! #KingLear

A friend replies.
Waiting for some Regan smack down!

And another.
A kingdom for my sanity…

Every night in theatres around Australia, audience members are tweeting: during interval, after the show and sometimes, mostly surreptitiously, during the show itself. Twitter is the new word of mouth and all the major arts companies are taking it seriously indeed.

“You tweet because you’re excited to be seeing something live after hearing so much about it,” says Suarez, who sought permission from the theatre to tweet during King Lear.

She sat in the back row to avoid disturbing other patrons. “It’s about sharing your emotions and your experience of the show. You might have a favourite scene or a line that you love and you want to share it instantly. I thought King Lear might be dry but it was really interesting and I wanted my friends to go and see it and be entertained.”

Suarez, who is the online marketing co-ordinator for the Brisbane Festival, was among more than 200 arts delegates attending an Australia Council for the Arts marketing summit in Brisbane. The hot topic was Twitter, the social networking website on which users can send and receive short messages of up to 140 characters.

For the performing arts, Twitter is shaping up to be revolutionary, as some of the world’s oldest media forms are compelled to engage with the newest. Both are about groups coming together to share an experience. But now, through Twitter, the audience and the makers of art are getting closer and closer.

“It’s a democratisation of art,” says Jill Colvin, head of marketing and communication at the Sydney Festival. “Audiences can talk directly to artists and each other. And companies can answer their questions and share ideas with people who are passionate about the arts. Festivals are talking to other festivals around the world and orchestras and dance companies, and audiences are listening in. It’s a very exciting time for the arts.”

The Sydney Festival has attracted more than 7600 followers on Twitter. In January, tweets poured in during Festival First Night as audiences talked about what they were seeing and recommended acts to their friends.

“People were watching Al Green perform in the park on a warm summer’s night and they wanted to share that experience,” says Colvin, who was also monitoring tweets to see if there were any crowd control problems on the night (there weren’t).

This kind of viral word of mouth – assuming it is positive – is potential marketing gold for arts companies but it must be nurtured rather than exploited. Twitter users don’t like the hard sell. No one wants to read “buy tickets now”. And no one enjoys a one-way broadcast from someone who never replies to your comments and doesn’t bother to follow you in return. For Twitter to work, it has to be a two-way exchange and that requires thought, energy and time.

“If arts companies want to attract new audiences, they have to jump in and chat about the minutiae of what’s going on,” says Fee Plumley, the digital programs officer at the Australia Council for the Arts. “Audiences are not just interested in a celebrity on stage. They really want to know how the show works, how the set was made, how it was cast, who’s doing the lighting and what goes wrong sometimes.

”The minutiae is often the most interesting stuff. It’s a mistake to think of Twitter as a marketing tool. It has to be a conversation.”

To that end, Company B at Belvoir St Theatre makes a point of replying to everyone who asks a question on Twitter and it re-tweets any positive mentions of its productions. All tweets are printed out and stuck on a bulletin board for cast and crew to read each day.

“It gives instant feedback, good or bad,” says Nathalie Vallejo, marketing co-ordinator. “It helps to know what people are saying and it’s mostly positive. We get more bouquets than brickbats.”

At the Sydney Opera House earlier this year, influential tweeters were invited to attend the opening night of a show by the British mentalist Philip Escoffey. “It was really hard to explain what he did so we asked people to tweet during the interval and after the show. We saw a real uplift in sales just from that kind of word of mouth,” says Victoria Doidge, the director of marketing and development.

“I think Twitter is a game- changer,” Doidge says. ”It gets people talking about art forms and it builds creative communities. People are passionately interested in what we’re doing, so we need to talk to them about what’s happening backstage and how art is being made.”

In a Nielsen poll, Australian social media use was deemed to be the highest in the world, ahead of the US, Britain and mainland Europe. Almost a third of arts consumers in Australia now use the internet to research a show or event, buy tickets, view art, listen to music or write blogs and share thoughts on social media, according to a recent report from the Australia Council for the Arts.

And it’s not just young consumers. Worldwide, the average Twitter user is middle-aged. Those aged 45-54 are 36 per cent more likely to visit the Twitter site than the rest of the population, according to a 2009 poll. These are figures the arts industry can’t afford to ignore, although most admit they are still feeling their way.

An early adopter was CarriageWorks in Darlington, home to a number of contemporary arts groups. The venue joined Twitter in 2008 when no other arts company in Australia was on board. It quickly discovered that no one was listening. So it rejoined the chat in 2009, just as Twitter experienced a tidal wave of new users. Now it has more than 3000 followers.

“It has been hugely positive for us as a large venue to be seen as having a human face and a slightly cheeky voice,” says Stephanie Zappala, the marketing manager. “We tweet about everything, from an artist talk coming up to behind-the-scenes things like a giant disco ball being hung in the foyer. People really like the sense of belonging and community that comes with knowing what’s happening in the building here.”

One of the most popular CarriageWorks tweets was a six-second video of a deluge of water cascading down the stairs during a recent downpour. “Our latest performance art installation,” the tweet said.

“You can’t be boring on Twitter, and it is beneficial not to be too self- absorbed,” Zappala says. ”It has to be fun and you have to talk about things that are happening in Sydney – like the rain, or a theatre show we attended – as well as sharing interesting tweets from other arts lovers or companies.”

Art galleries and museums around the world are also embracing Twitter. The Tate in London is the No.1 brand on Twitter in Britain, with more than 112,000 followers, beating the next biggest Twitter brand by a mile (the fashion retailer Topshop, with 71,000 followers and counting).

New York’s Museum of Modern Art provoked an online frenzy three weeks ago when the performance artist Marina Abramovic wrapped up her sit-in show, The Artist Is Present. One online wit described the event, recorded by thousands of tweeters and bloggers, as “social media’d up the f-kin wazoo”.

The Art Gallery of NSW got in on the act with a live “tweet tour” of its just-opened Paths to Abstraction exhibition. The tweets included: “You can see the influence of Gauguin in the works of Derain. Look for the saturated colours, some straight from the tube.”

Some companies are using Twitter to create work, too. In April, the Royal Shakespeare Company performed a retelling of Romeo and Juliet over five weeks with 4000 tweets (suchtweetsorrow.com).

The company’s artistic director, Michael Boyd, said the aim was ”to bring actors and audiences closer together” and the company was looking forward “to seeing how people engage with this new way of playing”.

“It’s the people’s opera and the perfect way for everyone to become involved with the inventiveness of opera as the ultimate form of storytelling,” said the Royal Opera’s Alison Duthie.

On Broadway, the major musicals have been slow to embrace the trend. But Rock of Ages is now playing ’80s trivia on Twitter and Next to Normal, a musical about a family dealing with mental illness, performed its entire show in tweets over three days.

Local musical producers have Facebook fan pages but few use Twitter. “The older producers don’t want to know about social media. They say, ‘Go ahead so long as it doesn’t cost anything and I never have to look at it,’ ” says one publicist.

The Australia Council for the Arts now has a Geek in Residence program, teaching nine arts organisations – including the Sydney Dance Company and Shopfront contemporary arts centre – how to update their websites and fire up their social media profile, as well as archiving digital material and learning about live and online performance.

“If you put an artist anywhere near technology, they will think of something creative to do with it. You just have to show them how,” says Plumley. “We want to create technically confident artists.”

But it’s not all fun and games. It can get narky and unpleasant in the Twitterverse. “Some people just bitch about things all the time,” says one arts publicist. “Everyone thinks they can review a show and some people just don’t know what they’re talking about and that can lead an audience down the wrong path.”

Colvin agrees. “You always get negative stuff and rumours – it’s not controllable. Twitter is an incredible, viral, wonderful, anarchic space. But if you are honest and use common sense and ethics, you will be fine. You have to have your heart and mind in the right place. If you respect your followers, they will trust you.”