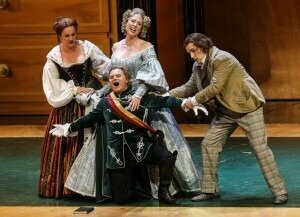 Politics put an end to opera as a business by outlawing gambling, a regulation that has continued ever since.
Photo: Reuters

George Orwell argued that “the golden age of the artist was the age of the capitalist. The artist had then escaped from the patron, and had not yet been captured by the bureaucrat”. The story I wish to relate here is the transformation of the financing and organisation of opera from aristocratic patronage, to entrepreneurial venture capital, and finally public subsidy. In the process, opera itself has been transformed.

Opera is the most expensive of all artistic forms, combining music, acting, scenery, costumes and sometimes dance. It first appeared in 17th century Italy when aristocratic patrons adopted it as a form of official entertainment, but this system crumbled under the burden of expense, creating conditions for opera houses and a market for entertainment to emerge in the 18th century.

This market connected artists with the public through the opera houses and their ringmasters – the impresarios. Impresarios were basically entrepreneurs who oversaw every detail of performance, from commissioning pieces to mounting them to securing their financial terms.

The impresarios were speculators, in it for the money not the art, but they toiled under great risks – a singer would fall ill, an epidemic would break out, a princely death would occur, or the first performance would fail to meet with audience approval. What made it worth the impresarios’ while was not so much the income from performances, but that from a supplementary source: gambling concessions.

Opera-casino combinations were the entertainment complexes of their day and their profits paid for the commissioning of new operas and ballets. They also provided the city-state governments in Italy with a lucrative source of licence fees from gambling concessions. Monte Carlo today is a reminder of this once-customary arrangement.

However, by 1815, the gambling concessions granted to Italy’s opera houses had been abolished by a reactionary and conservative Austria. Because the theatres could not survive without these concessions, the state stepped in with a direct subsidy. This was the beginning of opera’s reliance on the state that we see up to the present day.

This transformation of opera into a non-profit enterprise changed the art form. Opera’s legitimacy as an artistic genre grew rapidly and it became part of the national high culture. But its format was replaced by a new system of repertory opera that stressed revivals of established works instead of the creation of new works. The audience also shifted, from all social classes to the wealthy urban public.

Politics had put an end to opera as a business by outlawing gambling and forcing opera houses to depend on explicit subsidies. This burden of regulation from a distant, forgotten past has continued ever since.

Perversely, governments are now rediscovering gambling, though they keep lotteries to themselves by promising to earmark the proceeds for cultural establishments and other expenditures. This has not really changed the relationship between arts and the state. Risk-averse bureaucrats are more eager to please established, well-organised cultural special interests than to invest in new creative ventures. Unlike the Italian impresarios, they are not incentivised to support new ventures.

There is a glimmer of hope, though, in the competition among the casinos of Atlantic City, Las Vegas, and recently Macau, which has led them to rediscover the old business model of the Italian opera houses. They now provide such entertainment as Celine Dion, Beyoncé Knowles, and José Carreras in the same venues as gambling tables and slot machines.

One wonders whether Hong Kong has missed the opportunity to become the cultural capital of Asia. What if the British had never criminalised gambling or shackled the Hong Kong Jockey Club with its charity mission? What if the West Kowloon Cultural District Authority were re-organised and re-financed to offer a cultural future that could be enjoyed by all? I fear it is too late to do this. Professor Alfred Marshall once said: “A government could print a good edition of Shakespeare’s works, but it could not get them written.”

I would like to dream that some day the impresarios in Macau may bequeath us a form of cultural entertainment befitting a rising Asia. I hope to meet a Mozart in a game of chance there; I hear he was addicted to gambling.