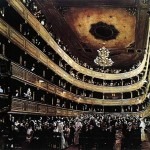 I think it’s time to emphasize solutions on my blog. I’ve made so many criticisms of the classical music world — justified criticisms, I don’t hesitate to say. And I love the theoretical discussions we get into, which I’m often (but, wonderfully, not at all always) the one to start.


But still it’s time to move forward, which doesn’t mean scrapping the critiques — which are needed; how else will classical music institutions ever change? — or the discussions. Alongside these things, though, we need solutions, things people are doing to change the ways that classical music functions. These are the things that will both create and ensure its future. Ensure that it has a future, because the old ways — for all the reasons I’m giving in my book — aren’t sustainable any more.

I’m encouraged to go in this directions by some of the feedback to the book I’m getting. Yesterday, for instance, I ran into an old friend from the business, someone I hadn’t seen for a while. And when I told him I was writing a book about the future of classical music, his first reaction was, “I hope it won’t be too depressing!”

That’s not an uncommon reaction. And some people — either in comments here, or in email to me — have said they found my chapter two riff depressing. (The shorter version of the riff is here.) No wonder they did — it’s about the evidence, statistical evidence, that shows how mainstream forms of classical music are declining.

But I need to balance the depressing news with good news, since there is good news, and since my book, after all is not called “Death.” It’s Rebirth.

So for my first “solutions” post I want to give a shout to my friend Erica Sipes, a pianist married to a singer who teaches at Virginia Tech. She and her husband gave a recital not long ago, and as Erica tells us in her blog, they created a new recital format. For instance:

We performed three Respighi songs, all of them describing scenes in nature.  We felt that Respighi’s settings of all three are a bit like miniature tone poems…they evoke the scenes they describe and are filled with different colors and timbres.  We decided that we wanted our performance to involve more of the audience’s senses so at the beginning of the first song, “Notte (Night),” with Tadd off to the side of the stage, we had sounds of crickets and other night sounds arise out of silence while the entire translation of the poem appeared on a screen behind the piano.  This lasted about 30 seconds and then Tadd moved towards the piano and I began the piece while the sound effects faded out and a simple video of a blooming rose was projected on the screen.

Now, maybe this wouldn’t be to everybody’s taste. But for Erica and Tadd, and for their audience, it worked wonderfully:

The 30 seconds of sound effects preceding the start of each song was incredibly magical, even for me.  It seems so rare in our culture that we have moments such as this.  They were almost like moments of communal silence, even though they weren’t silent.  They were moments of reflection and meditation and what was amazing to me and to many that I spoke to afterwards, was that there wasn’t a sense of discomfort or impatience in the audience as I had anticipated.  As a performer, such an experience, was awesome and enabled me to perform without those harmful tapes that can so often ruin a performance.  I felt in the moment and connected with Tadd and with the music – a fantastic experience.

But you should read Erica’s entire post, to see more about how this worked, and to see what else she and her husband did. My point isn’t that everyone should do recitals in just this way. It’s that Erica and Tadd found a way that worked for them, and which gave the recital a new kind of life, especially, as Erica tells me, for the students in the audience.

Because that’s what it’s about. All of us doing things in new ways of our own, so that classical music can be transformed, in ways that none of us can predict.

I want to add, by the way, that I know Erica mostly online. I’ve never met her, though we’ve talked on the phone. She’s one of many people I’ve come in contact with, people who like what I’m saying here (and elsewhere), and who turn out to be thinking many of the same things I think.

And, best of all, doing something about it. A perfect illustration of what I meant in my post about the top ten changes in classical music in the last decade, when at number one I put “A movement for classical music change.” That movement is real. Erica and so many other people I’ve gotten to know through my work online are living proof of that.

I’ll soon create another sidebar to my blog, in the “Resources” section to the right, titled “Solutions.” There I’ll post links to new things that people are doing, either things I find, or things you all tell me about.

Send me your solutions, so I can feature them here!