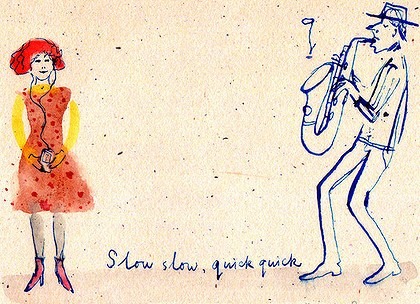 MAN, his intellect ever at the service of his libido, saw the possibilities of music immediately. As the first note was twanged on a gut string, he sat himself down like a witch doctor composing hexes and began writing songs to bewitch women. A beseeching falsetto backed by a cadenza wandering lost and watch her eyelids flutter, her mouth gape and her breath shorten. Compadre, this music stuff works on them like they were mainlining an 80-proof aphrodisiac.

Injected through the ears to the brain and heart, it flows onward and downward to points south. Not the least payoff in being a musician has always been getting laid. A minstrel with a handful of pretty riffs could storm a convent and have the nuns shuck old habits for new.

Music has this effect on women because men wrote it to. It is art designed to win women. A song is a sweet story to convince ladies they are loved and to induce them to lie down and make love. It has undergone an evolution of trial and error just as birdsong has. Some songs didn’t pay off, and those tunesmiths went unrewarded and died out. Other songs struck pay dirt and were copied. Essentially, music is a con, a shimmering mirage purporting to be love. Which is not to say it is not the very highest art. It is.

But why did women traditionally feel the need to be loved before granting their favours? Why has the link between love and sex been so strong for women? Because evolution insists a woman maintain a hold on a man long enough for him to help protect and provide for their offspring. If he is besotted he will hang around and the kids are safe and her DNA will be passed on.
Advertisement

So, man, to get around this coquettish insistence on love, invented music. The faux love implicit in a song blinds her and creates a short-term delusion in which she gives the green light to a risky tryst as though it were the real thing. In short, music dupes women into having sex by making them think they’re in love, in which state they are suckers for the priapic predations of men. It was a sweet scam.

This device (I will call it by this shapeless name) kinetically mimics the melodies of her favourite song, aria or ballad. It leaps to the beat of whatever number she’s listening to. Perhaps a churchgoing lady might choose a hymn; a widow in Bentleigh might play Handel’s Music for the Royal Fireworks through her device and allow her neurons and genital ganglia to be conducted simultaneously to climax by that German genius as if he were some gigolo/Eros casting bolts of psycho-joy down from Olympus. What a wonderful coming together (forgive me) of art and the libido.

The woman who wrote the product review I read took time to compose a playlist, amusingly including the songs Ever Fallen in Love?, by the Buzzcocks, and Do It Again, by Steely Dan. Alas, she failed to get through one track before her choir of girly nerves reached crescendo. She noted (with the kind of wonder that made me picture her holding the device as if it were the Cullinan diamond) that it was sensitive enough to differentiate between bass, singing, musical notes and instruments, and that its physical reaction differed with pitch.

The volume and intensity of the experience is controlled by an app. The device even has a mode in which it picks up ambient music and replicates it kinetically. Imagine the ecstatic rigours Angus Young might inflict on the Grand Final crowd with a guitar solo if AC/DC get the gig this year and the device has been widely taken up. And, if Geelong wins again, how many female fans will need rescue from Bizet’s blissful blizzard?

A man should, by rights, despise the device. But I can’t help being impressed by the political and social freedom that underlies its invention and by its suggestion of emancipation for women from those who would control them.

This wondrous device may have linked the emotional and physical in a way that could, possibly, give off the same sting as making love with someone you love. But the Americans may have invented portable love here. The emotional journey of love, reaching its destination in slick, astonished congress with the adored one, might now be had at the turn of a dial.

Undoubtedly, then, the device is a greater technological breakthrough than the moonshot … for philharmonic floozies, anyway. But if love, or a very close facsimile, is now downloadable and storable and able to be unleashed by your phone … where does that leave men? It was speculated by those witnessing the industrial revolution that all tasks one day would be performed by machines and man reduced to being a thumb-twiddling spectator. A similar fate may now be assumed for any chap who can’t keep a four-four rhythm as well as Charlie Watts. If this is the case, then one is forced to admit there are worse things to be than a thumb-twiddling spectator.