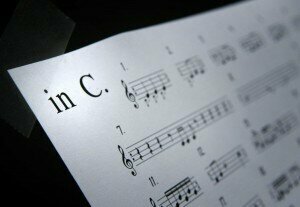 On a cold Berkeley morning early in December 1968, I cut class and joined a queue on Telegraph Avenue, waiting for Discount Records to open. The line wasn’t as long as the one I’d joined for the Beatles’ White Album a week or two before, but it was sizable and included many of the same fans. This time our impatience was for the first recording of Terry Riley’s transformative “In C.”

“In C,” which had premiered in San Francisco four years earlier, would ultimately be credited with formulating the Minimalist movement in music that Steve Reich (who performed in the “In C” premiere), Philip Glass and later John Adams would further pioneer and eventually make mainstream. Minimalism would herald an unexpected inventive return to consonance, traditional harmony and pulse, all of which had little appeal to modern music, academic or avant-garde. Full story.