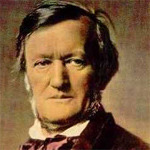 Can we separate Wagner’s artistic achievements from his personal views?


DA-DA-da daaaaa da, you hear that music, da-da-da-daaaaaaa da, it’s the Ride of the Valkyries, da-da-da daaaaaaaaa da, flying towards our shores like Apocalypse Now choppers, coming to blast defenceless little Melbourne with the powerful napalm of 19th century German opera, DA-DA-DA DAAAAAAAAA. I’m excited, I’m so excited, Wagner’s Ring Cycle is coming to town in 2013 and I can think of nothing I would rather do in three years’ time than sit and watch four epic, brassy operas with thrillingly umlauted names like Die Walkü¨re and Gö¨tterdä¨mmerung, performed in the ear-caressingly gorgeous language of German, with a cast of stout men with beards and boobs and stouter women with boobs and beards playing Scandinavian gods who are fighting for a ring that gives them magic powers, but not the Lord of the Rings ring, a more uninteresting flat-packed Ikean version.

Oh my Nordic bass-baritone god! – I will definitely be queuing to see that, unless something better comes along, like if the show times clash with Channel 31’s Punjabi TV, or if it’s crumbed prawn cutlet month at the London Tavern.

It’s going to be a stupendous show, this four-ring Ring Circus, though there’s just a couple of teeny near-negligible things that may put some audiences off. Like its length: it’s going to be 16 hours long, and opera-hours are like dog-years, they’re a ratio of one to seven, so this will feel more like 4½ days, but with only two toilet breaks. And it’s going to be pricey: this is a $15 million production, so producers will need to charge high ticket prices to recoup their investment – and with a total of only nine Aussie fans on the ”I heart Wagner” Facebook page, it may have to be $1.7 million for an A-reserve ticket, with a much cheaper $1.2 million obscured-view ticket, sitting behind the left side of Brunhilde’s armoured hydraulic uber-boob.

And there’s one other tiny, almost-irrelevant, thing working against this Wagner show, and that’s a thing called Wagner. He’s the guy who wrote the operas and he’s widely regarded as one of the world’s greatest opera composers and also one of the world’s greatest German-nationalist white-supremacy Jew-detesters. He was a very racist fellow, this Wagner, and his anti-Semitic views even had an influence on Adolf Hitler, so going to see a Wagner opera has a whiffy iffiness about it, as if you were going to see an opera written by David Irving for the Aryan Fatherland’s Gilbert and Sullivan Light Operetta Society.

It’s a tricky, mind-pretzelling dilemma: is it all right to enjoy the talents of a person when the person himself is a bubbling tureen of mucoidal secretion? When my beloved and I went to see Polanski’s The Ghost Writer, we both came out in a state of enthused confusion – we were enthfused. She said: ”That was such a good thriller, Polanski’s got to be one of the finest rapist paedophiles working in cinema,” and I said: ”Yeah, he has a visual boldness that’s unique to Polish sodomites living in exile”.

With Woody Allen’s movies, people go and see them and come out saying: ”Ughhh, another film about old men getting it on with young girls, just Allen trying to justify his relationship with Soon-Yi”. But they’re always going back to see the next Allen movie when it comes out, usually the next day because he makes a film every 2½ hours.

How do you separate the achievements from the achiever? How do you admire gifted famous people who lead giftless infamous lives? Charlton Heston, that gun-toting white-power magnificent Moses. Caravaggio, the baroque-painter who committed a baroque murder then baroque out of prison. Mel Gibson, our proudly Aussie alcoholic race-hater and alleged girlfriend de-teether. Tiger Woods and his way-below-par 12-hole round of philandering. Michael Jackson and his fondness for the fondle. And then there’s Richard Wagner: will I go see his Ring Cycle? Probably. Because the goddamn bugger was a Gö¨tterdä¨mmerung genius. And also because I’m hot for a busty boobular Rhinemaiden.