Media
For Musicians, the Most Prized Violins Are for Borrowing, Not Buying
September 11th, 2013
Tags: instruments 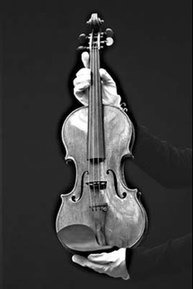 The din inside the Metropolitan Pavilion in Chelsea recently was that of any crowded trade fair, except for the snippets of music that wove in and out of the roar of voices.

Strains of Bach’s Sonata for Solo Violin in G minor mixed with the opening bars of Bruch’s Violin Concerto No. 1. A high singing line from the Sibelius Violin Concerto floated briefly above the noise before stopping mid-phrase. It was the opening day of Mondomusica New York, a new North American offshoot of the biggest industry event in the string-instrument world, which for years has been held annually in Cremona. The violins that came out of that northern Italian city in the 17th and 18th centuries inscribed with names like Stradivari, Guadagnini and Guarneri del Gesù are still the most ardently coveted — but the market for them is now global.

Most of the 160 exhibitors at the three-day event were violin makers and dealers from North America, but there was also a large French contingent, as well as companies making strings, carbon-fiber bows, instrument cases and folding chairs designed with string players in mind. Many of the visitors were musicians in search of a better instrument; they ranged from teenagers trying out their first handmade violin under the nervous gaze of their parents to professionals who stole longing glances at the 18th-century treasures that high-end dealers displayed in glass cases lighted like reliquaries.

And a little prayer may well be required for a violinist to come into possession of one of these. With the price of a Strad at $2 million to $18 million, the market is now dominated by wealthy philanthropists, foundations and hedge funds.

Christophe Landon, a violin maker and dealer on the Upper West Side who has restored, sold and appraised rare instruments for more than four decades, sees firsthand the changes. “I know many 70-, 80-year-old musicians who bought their Guadagninis in their 20s and were able to pay off the purchase within two or three years,” he said during a panel discussion on investing in rare string instruments. “Now players’ salaries are so low, and the price of instruments so high, they’ve skyrocketed out of sight of musicians.”

Most often soloists rely on the generosity of a wealthy owner or foundation to lend them an instrument. When an institution purchases one, it is unlikely to enter the market again, leading to an ever-shrinking pool of available instruments. Add to that the rise in demand fueled by the growing number of concert soloists coming out of Chinese and South Korean conservatories, and prices are guaranteed to continue to rise.

In 2011 the Nippon Music Foundation, which has built up a collection of more than a dozen first-rate instruments that it lends out to musicians, sold the Lady Blunt Stradivari — which had changed hands in 1971 for $200,000 — for $15.9 million. More recently, an anonymous buyer purchased, for the use of the violinist Anne Akiko Meyers, the Vieuxtemps Guarneri del Gesù, up for sale for $18 million, for an undisclosed but said to be record figure.

Such rare instruments are an attractive proposition to investors, then, especially since the stock-market downturn of 2008 led many of them to seek more stable alternatives to equities. Mr. Landon is a partner in the Artist Rare Instrument Fund, a hedge fund that plans to not only purchase Strads, but shares in valuable violins or cellos owned by soloists who agree to sell a substantial portion of their equity in their instruments to the fund.

Kerry Keane, international specialist head of musical instruments at Christie’s, said there were certain factors that make any collectible a good long-term investment, chief among them doubt-free attribution, quality and good condition, though also issues of provenance, an object’s freshness to the market and, to a lesser degree, fluctuations in fashion.

“But instruments are difficult to commoditize,” he added. “You can do that with wine or prints, collectibles that come in multiples. In the case of instruments, the data just isn’t there, and some of the data we have is corrupted. But what makes a rare violin different from other collectibles is the synergy that comes out of placing it in the hands of a wonderful artist. Without that, you are just dealing with a sculpture that happens to look like a violin.”

Handing a precious violin over to a musician can be nerve-racking for the new owner. Thefts occur, as do accidents. Yet, Mr. Keane said, the fact is that string instruments “are happiest when they are being played.”

And the risk that comes with handing a Strad to a touring musician is balanced by the “social capital” to be gained, according to Jason Price, the director of the Internet-based Tarisio auction house specializing in fine string instruments. “The owners of a Stradivari lent to a star violinist will have their name printed in every concert program,” he said. “You can reach 4,000 people a night that way.”

It’s an investment strategy that rewards patience. “There are lulls in the market,” Mr. Price said. “It can take two or three years for an instrument to find the right buyer.” The Vieuxtemps was on the market for nearly three years because its owner, a British banker, wanted a record price, and was in no rush to sell. “He just waited,” Mr. Price said.